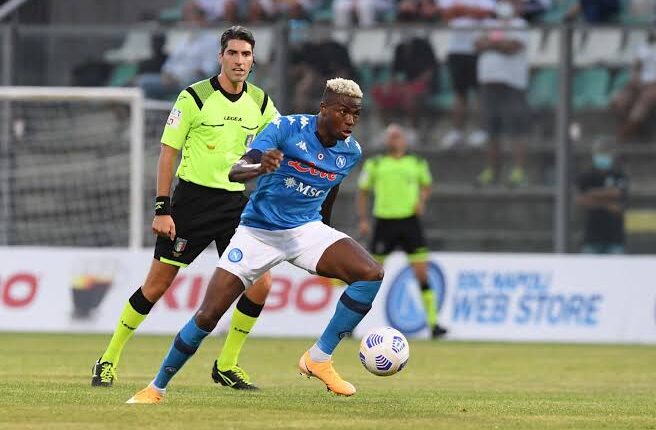 Napoli’s coach, Gennaro Gattuso, has hailed new Nigerian signing, Victor Osimhen, on his impact and dedication to the team, saying his addition has greatly boosted the team’s chances of returning to the league’s top four.

He explained that his serious attitude and dedication to work reflected the ingenuity and doggedness associated to Nigeria and Nigerians and that such was needed for the success of the Italian team in its quest for return to continental football.

Gattuso said despite being a young boy, Osimhen’s head functions like that of old man fully developed with lot of experiences and that his ability has earned him a pride of place in the team.

Osimhen became Napoli’s record signing when he joined from Lille in the summer for a reported 70 million euros.

He was brought on for his debut after an hour of Sunday’s Serie A match and the Nigerian made an instant impact in their 2-0 win.

”I was struck by Osimhen’s serious attitude. He has not forgotten where he came from and the sacrifices he made.

”He built himself up on his own and I congratulate him for his will and desire.

“He is a young lad with the head of a 40-year-old. I hope he does not make mistakes and does not change his attitude,” Gattuso said after the game.

Osimhen, 21, grew up in a tough district of Lagos, lost his mother at a young age and along with his brother and sister, sold bottled water in Lagos traffic to help his family make ends meet.

Gattuso said that he wanted to get Napoli back into the top four again after last year’s turbulent season, where they finished seventh after a late recovery and won the Coppa Italia.

”It  is natural that, given the history of the last 10 years, we want to return to the top four.

”I want to see a well-organised team that have clear principles in their heads and that know how to make themselves available in difficult moments,” the coach said.