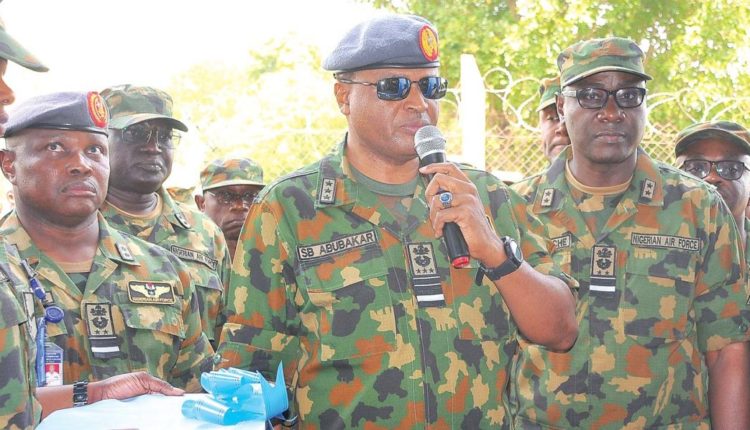 The Nigerian Air Force has reiterated its commitment towards ending insurgency bedeviling the country, saying strategies are being put in place to outsmart the insurgents and other security challenges in the country.

It explained that though the renewed activities of the insurgents, who are remnants of the degraded groups in the country called for concerns, the force will stop at nothing in securing and protecting the people from the internal and external attacks of the state enemy.

The Chief of Air Staff, Air Marshal Sadique Abubakar, said part of the measures and strategies being put in place was to deploy more troops to the epicenter of the insurgents, Maiduguri, the Borno State capital, to strengthen the ongoing fight against insurgency.

Abubakar, who spoke on Wednesday, during a working visit to the Air Task Force of Operation Lafiya Dole, maintained that the forces resoluteness in the fight against the nation’s security challenges remains intact, adding that with sheer bravery and sacrifice, the nation will soon win the war against the insurgents.

While appreciating the efforts of the troops on the frontline of the battle against the insurgents, Abubakar reiterates the Force commitment in prioritizing their welfares and provision of all necessities which will serve as a morale booster in going all out in the ongoing fight against the insurgents.

“The security challenges faced by Nigeria are obstacles to development that can only be surmounted if we remain resolute in the fight against insurgency and other forms of criminality.

“In pursuit of NAF constitutional roles, and in line with my vision for the force, I have constantly sought, not only to evolve strategies that will enable the Force to effectively and efficiently deal with prevalent security threats.

”Also to see to it that personnel welfare is given utmost priority,” the air staff chief said.

The CAS while inaugurating some projects during the visit including lodges in preparation for the additional personnel to be deployed, reminded the officer of the COVID-19 pandemic and urged them to follow all precautionary measures directed by medical experts to remain safe even as they fight the enemies of the State.