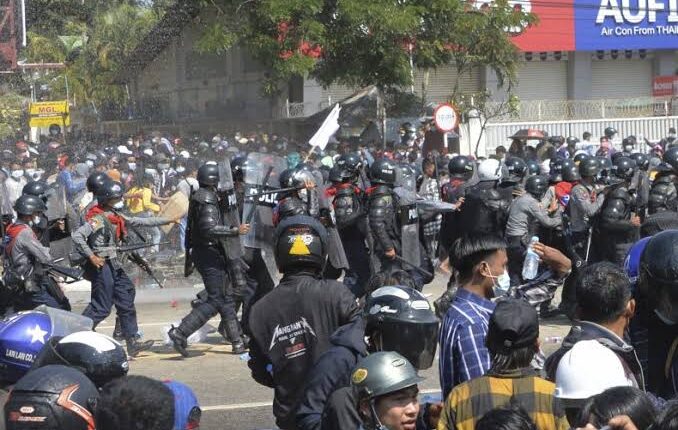 Tens of thousands of Myanmar’s citizens stormed the streets on Sunday nationwide in one of the biggest days of protest against last month’s coup despite overnight raids by security forces in the main city Yangon on campaign leaders and opposition activists.

Police fired tear gas and stun grenades in Lashio town in the country’s northern Shan region, according to live video posted on Facebook. A witness said htat police opened fire to break up a protest in the historic temple town of Bagan but it was not clear if they were using rubber bullets or live ammunition.

There were no immediate reports of casualties. As gathered, protests in half a dozen other cities were peaceful.

The biggest turnout was in Myanmar’s second city, Mandalay, where activists staged a sit-in protest after two minutes of silence in honour of people killed by police and the army, video showed.

The United Nations alleged that security forces have killed more than 50 people to stamp out the daily demonstrations and strikes in the Southeast Asian nation since the military overthrew and detained elected leader Aung San Suu Kyi on Feb. 1.

“They are killing people just like killing birds and chickens,” one protest leader said to the crowd in Dawei, in the country’s south. “What will we do if we don’t revolt against them? We must revolt.”

Protests were also held in at least three places in Yangon, where residents said soldiers and police moved into several districts overnight, firing shots. They arrested at least three in Kyauktada Township, residents there said. They did not know the reason for the arrests.

Soldiers also came looking for a lawyer who worked for Suu Kyi’s National League for Democracy but were unable to find him, a member of the now dissolved parliament, Sithu Maung, said in a Facebook post.

The police and Junta spokesman were not availabe for comments as at the time of filing this report.