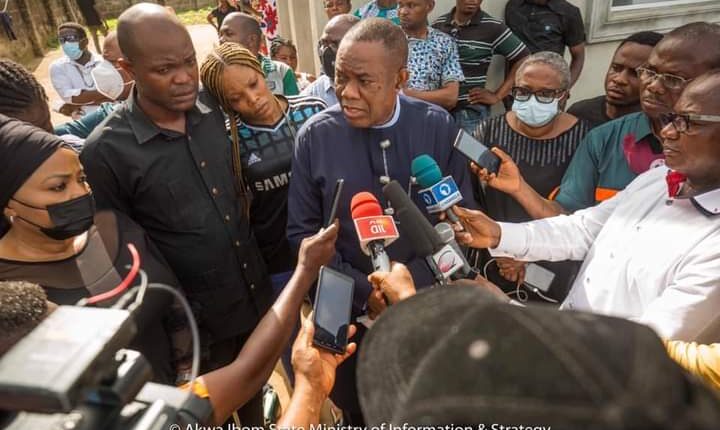 The brother of 26years old job applicants, Iniubong Umoren, that was allegedly abducted, raped, and murdered in Akwa-Ibom State, Ukeme Umoren, has said that the deceased contacted the suspect, Uduak Akpan, for employment to cater for her financial needs pending National Youth Service Corps (NYSC) release of her call-up letter for posting.

Umoren, who expressed deep pains over the loss of her sister, stated that the deceased put herself forward for employment in order to make a living and cater for her needs before leaving for service rather than depend on other members of the family.

He spoke on behalf of the family after the State Governor, Udom Emmanuel, paid a condolence visit to the family after the law enforcement agency announced that Akpan, the prime suspect, had been arrested for questioning over the death of the University of Uyo graduate.

The brother said: “My sister, was still waiting for her call-up letter for NYSC mandatory one-year service but after realizing that the Corps was delaying the issuance decided to look for a job. Her major motive was to garner experience and make a living particularly to address personal financial needs and not rely on anyone for supports before leaving for service”.

He, meanwhile, appealed that the state government should ensure that justice was being done, to bring all the perpetrators involved in her sister’s death to book, saying, please do not abandon us.

Earlier, Udom has promised that everyone who had a hand in the death of late Iniubong will receive adequate punishment as stipulated in the country’s 1999 constitution.

The Governor, who was represented by the Secretary to the State Government (SSG), Dr. Emmanuel Ekuwem, expressed deep pain over the gruesome manner in which the innocent lady that went out in search for a responsible means of livelihood met her demise.

The governor praised the hard-working spirit of the deceased and prayed that God should condole the family as well as promised the support of the State Government to the remaining members of the family.