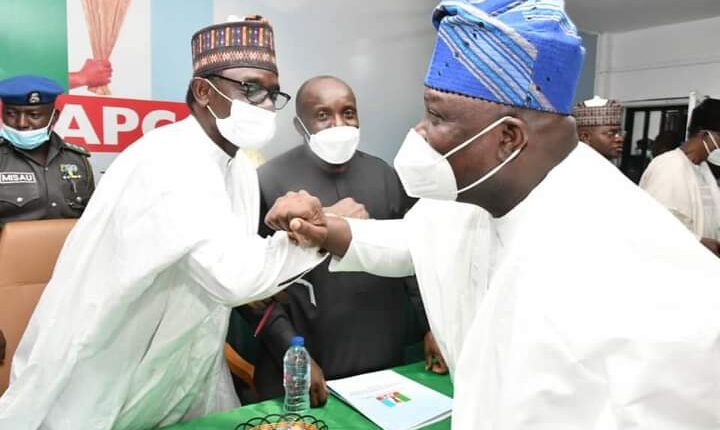 The Lagos State former Governor, Akinwunmi Ambode, has described his selection into the 61-member of the All Progressives Congress (APC) Contact and Strategy Committee as a call to serve the country.

Ambode said that serving the country was more important to him and that he was ready always to contribute his experience over the years to the development of Nigeria and APC.

He was selected into the committee alongside his successor, Babajide Sanwo-Olu, Kogi State Governor, Yahaya Bello, his Borno state counterpart, Babagana Zulum, Deputy Senate President, Ovie Omo-Agege, and two former Speakers of the House of Representatives, Dimeji Bankole, and Yakubu Dogara as well as others.

The former governor’s appointment came barely one year and nine months after leaving office and distancing himself from political discussion within the party and across the country.

Speaking after his inauguration on Tuesday in Abuja by the Chairman of the Caretaker/ Extra-Ordinary National Convention Planning Committee of the APC, Mai Mala Buni, he commended the party leadership for considering him worthy to serve the country and APC.

He said: “Along with other notable and distinguished colleagues, I was today selected by our party, the All Progressives Congress, to be a member of the Contact and Strategy Committee. This is a call to serve the Party and more importantly, our nation”.

Following the new appointment, party members were said to have started raising concerns on what could play out within APC ahead of 2023 general election.

They argued that his selection further indicated that in 2023, the former governor could be instrumental in the scheme of things and determine those that would hold public offices in Lagos.

Meanwhile, his admirers have started extolling his virtues, particularly the legacies he left within the four years of his administration, 2015-2019.

Many described his tenure as that which considered the people as paramount and delivered projects that truly impacted their lives.

One of his admirers, Balogun Micheal, added: “We can never see such a governor again in Lagos state. Your work speaks. Am still your fan. # light up Lagos, Oshodi mega park, community roads, and many more# THE BEST”.

Another admirer, Jimoh Lawal, said: “I salute your courage my governor. I hope others will learn from you. Inspite of the push from enemies within and outside to move out you stick to APC. Better rewards are on the way to you. More love”.

“Congratulations, we have a strong belief in you. More appointments and success ahead by God’s grace. Good people of Lagos state and Nigeria at large have missed you sir”, Walihi Oladeinde said.

Before the appointment, The Guild had earlier published that the former governor, against speculations, returned to Lagos and revalidated his membership with the party, assuring his loyalists that he was not prepared to dump the party for others in the country.

During the exercise, Ambode, who participated with his wife, Bolanle, in his hometown, Epe was welcomed by several admirers that trooped out to welcome the immediate past governor and assured him of their loyalty.

The former governor completed his revalidation exercise at Ward A in Epe, the ward where he often cast his vote during elections.