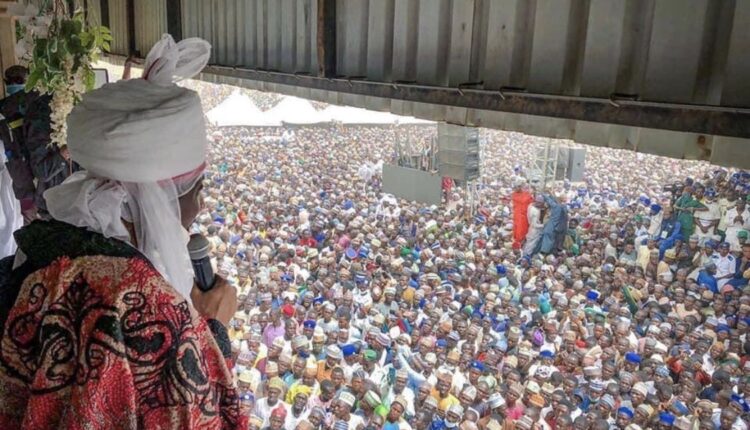 The open ground for this year’s Maulud celebration of a Muslim cleric, Sheikh Ibrahim Niass in Sokoto State was a rowdy place with thousands of  Muslims jostling to catch a glimpse of former Emir of Kano, Muhammadu Sanusi, after his installation as the new Caliph (leader) of Tijaniyyah movement in Nigeria,

In what appeared to be survival of the fittest, the Muslims faithful shunned COVID-19 protocols announced by Federal Government at the venue, with many not putting on their facemasks while a sparse minority who used theirs hang the protective clothings below their chins, leaving their mouths and nostrils uncovered.

Also, the social distancing rule, which was considered a critical non-pharmaceutical preventive measure was ignored as many occupied roofs of buildings to get a clearer view of Sanusi while addressing the crowd.

In the images observed by The Guild, the former monarch was seen addressing the crowd and stating his plans to ensure development across the country.

Confirming the selection, the ex-emir’s spokesperson, Saadatu Ahmed, in a statement posited on his official social media handle, confirmed her boss’s new position.

Ahmed added that the decision to appoint Sanusi reached in Sokoto during the 2021 Maulud celebration of a Muslim cleric, Sheikh Ibrahim Niass, in the state. 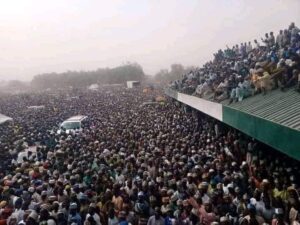 It would be recalled that Tijāniyyah is a Sufi tariqa, originating in the Maghreb, but now more widespread in West African countries, particularly in Senegal, The Gambia, Mauritania, Mali, Guinea, Niger, Chad, Ghana, Northern, and South-western Nigeria as well as some part of Sudan. The Tijāniyyah order is also present in the state of Kerala in India.

The action has began to generate reactions from Nigerians including Reno Omokri, a spokesperson to former President Goodluck Jonathan, alleging that the government has included preferences to the COVID-19 protocol enforcement across the country.

Omokri in a statement said: “This is the former Emir of Kano, Sanusi Lamido, addressing a crowd at his turbanning as caliph. If this were a hotel in Kaduna, Nasir El-Rufai would demolish it. If it were Club Cubana in Lagos, the Nigerian police would arrest everyone there. Naira Marley, Funke Akindele, and several churches have been prosecuted over less crowds than this. Leading me to ask, is there one law for some Nigerians, and another for others?”.