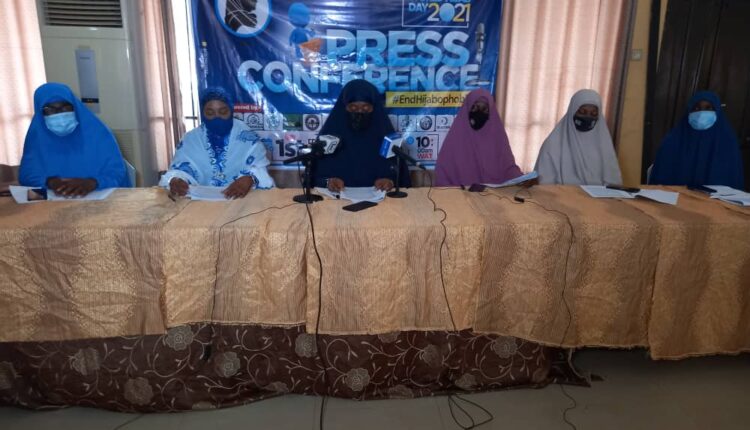 As part of activities commemorating this year’s World Hijab Day (WHD), a coalition of Muslim organizations across the country has lamented continued cases of discrimination against Muslims for wearing hijab (Islamic headscarf), particularly girls of school age in public schools in Nigeria.

Apart from school girls, the coalition consisting of 15 Muslim organizations, indicated that grown-up women and Muslim professionals adorning the religious headscarf were experiencing discrimination in the workplace and other cooperate setting on account of their dress mode.

It argued that the increasing menace where Muslim girls of school age were put in a delicate situation of choosing between their faith or education was saddening in a country where her constitution guarantees freedom of association and that of religion.

The convener of Hijab Rights Advocacy Group, Mutiat Orolu, alleged that female Muslims were discriminated against during registration for National Identity Management Commission and Unified Tertiary Matriculation Examination, banks, among others.

Orolu, who addressed a press conference on behalf of the coalition at Alausa Secretariat Mosque, Ikeja on Monday, urged President Muhammadu Buhari and the 36 State Governors to uphold the constitution’s provision and put up other policies aimed at ending discrimination against hijab-wearing Muslims.

According to her, Buhari, state governors, the National Assembly, State Houses of Assembly, the Judiciary, and all regulatory authorities are urged to uphold the provisions of the constitution and also other relevant laws, to ensure that Hijab-wearing Muslim women are not harassed and discriminated against.

She added that it was discriminatory to deny any Muslim Woman or girl who so desires to wear the Hijab from doing so, adding that it was disturbing that such discrimination is not recorded when Muslim women cast their votes during elections.

“Some have even used the Boko haram bombing to justify the prohibition of hijab, yet when Babarigas and agbada, laptop bags and luggage, even fruits and foodstuff loaded on wheelbarrows were used, no one called for the banning of these items. Also, there has not been any chaos because women wear hijab, Hijab is not the problem.

“Similarly, the narrative that if the hijab is allowed, the adherents of other faiths would also want to wear their religious garb does not and should not prevent Muslim Women from wearing their Hijabs, as the Constitution covers all religions and everyone has a guaranteed right to practice his religion. It is also important to emphasize, that it is compulsory for a Muslim woman to wear the Hijab any time she is to step outside her house or in the presence of those that are not close family members.”

Continuing, Orolu said “we have also recorded several cases, where public services like NIMC registration, UTME exams, and even banks are located in facilities owned by the church, Muslim women in Hijab are denied entry, our daughters have had to take off their Hijabs in order to write UTME exams or even collect their ATM cards.

“It, therefore, seems that the only time Muslim women are free from discrimination is when they cast votes at elections or when they are paying customers, as these companies who would gladly take their money despite the fact that they wear hijab, will not employ them as staff even when they have certified them competent to be employed by them.

“We, Muslim Women, urge the President of the Federal Republic of Nigeria, Governors of States, the National Assembly, State Houses of Assembly, the Judiciary and all regulatory authorities to uphold the provisions of the constitution and also other relevant laws, to ensure that Hijab-wearing Muslim women are not harassed and discriminated against.

“We urge all regulatory authorities to sensitize their staff and agents on the Rights of fellow citizens as guaranteed by the constitution and other regulations to forestall further conflicts in the future.

“We compel all regulatory authorities and corporate bodies that are not registered religious organizations, to prevent their staff and agents from discriminating against Hijab-wearing Muslim women and refusing them services because of the Hijab and adding punitive measures in order to forestall this issue from recurring exponentially.”