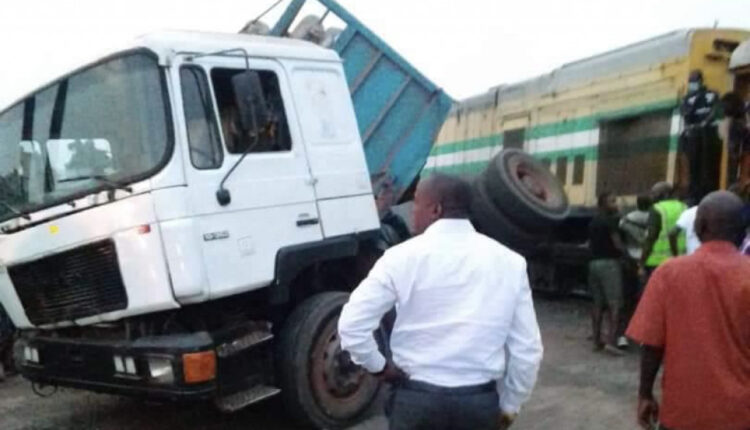 Activities around the Iju area of Lagos State have been brought to a forced halt after a train crushed a truck loaded with animal feeds in the axis which has led to massive gridlock in the adjoining areas.

As gathered, motorists and other road users within the Jonathan Coker Railway Level Crossing vicinity were enveloped in fear after the incident as many were rushing out of their vehicles and scampering to safety.

As learnt, the truck has crossed the line when the train said to be coming from Alagbado end of the line crushed the goods-laden truck which landed on a parked tricycle without a passenger.

Confirming the incident, the Lagos State Commissioner for Information, Gbenga Omotoso, urged road users to ply alternative routes pending the removal of the accident truck and the train.

“A minor road accident between a train and a truck loaded with animal feed at Jonathan Coker Railway Level Crossing.

“As a result of this, one of the front tyres has impeded the movement of the train. The airflow of the train has also been exhausted making the train to be stationary at this point, hence NRC is making frantic efforts at moving the train using another motor.

“Consequently, vehicular traffic from Abule Egba inward Iju Road through Jonathan Coker is at a standstill. Motorists have been advised to make use of alternative roads to connect their destination(s).”

Meanwhile, NRC officials and other emergency responders are currently on ground to ease the congestion and evacuate the accident truck and the train coach.

In a related development, an unidentified adult male has lost his life, while two other adult males sustained various degrees of injuries in the road accident that occurred at Oniwaya junction on Capitol Road, in Agege

“Investigation carried out revealed that the accident occurred as a result of reckless driving. Further information gathered from the Police officers at the incident scene revealed that one adult male lost his life and two adult males sustained inquiries.

“However, both the commodity and casualties had been taken away by the investigating Police officers before arrival of the agency’s response team,” he was quoted as saying in a statement by the agency spokesperson, Nosa Okunbor.