Share
For thousands of Lagos State Civil servants and other staff of private firms situated around Ikeja Central Business Districts (CBD), connectiong their various offices daily through Agege and environs, have become a daunting task with several manhours lost in traffic following Nigerian Police decision to shutdown a major access road, Acme, since May 29th, 2021.
The road, which had become a major access link for motorists en route Ojota axis, was said to have been shutdown by Lagos Command of Nigerian Police basically to prevent members of All Progressives Congress (APC) in the state that were aggrieved over outcome of council primary elections for the forthcoming Local Government and Local Council Development Areas (LCDAs), from accessing the party secretariat on the road to protest against outcome of the exercise across the state.
Following the law enforcement agency’s decision to close down the road, which was said to have been approved by the state Commissioner of Police, Hakeem Odumosu, motorists have continued to lament the road blockage, saying it has further increased their travel time daily.
The pains inflicted on the road users, with 90 percent residing in Ifako-Ijaiye, Agege, Alimosho Local Governments and some parts of Ikeja, was further compounded on Tuesday following the downpour experienced across the state which left forced many that often patronise commercial motorcyclists to shelve it for buses.
These decision coupled with blocked drainage, it was gathered, further increased travel time on the only access road, Wempco road, with thousands of commuters including civil servants resuming late for work.
Speaking to The Guild over hardship brought by the law enforcement officers’ decision, a civil servant, who did not want his name mentioned, condemned the Commissioner of Police decision to block the road on the ground that they needed  to prevent breakdown of law and order around APC secretariat, saying this is an action that indicated their level of experience on crime prevention.
A motorist, Kazeem Audu, described the agony they go through daily on the road as appaling and appealed that the State Governor, Babajide Sanwo-Olu, wade in and direct its reopening immediately to avoid casualities. 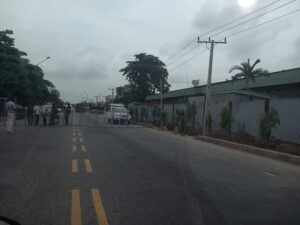 Kazeem, while arguing that it was illegal for a major road to be blocked for over 10 days to resolve political party issues thereby subjecting people to harrowing traffic snarl, threatened to sue the Nigerian Police for their actions.
According to him, “I don’t understand this. How can you block a major road on a Monday morning when people are rushing to their various places of work? You are subjecting us to harrowing traffic snarl. I mean the whole of Ikeja is adversely feeling this blockade.
Another motorist, Adebimpe Awobiyi, narrated tyhat due to the road closure, traffic often extended to Adeniyi Jones, Aromire, Allen Avenue, among others, appealing that the House of Assembly intervene.
Awobiyi, while sharing the agony she and other motorists were forced to undergo, said that the entire axis was grounded and that the road, Acme road, that should have reduced travel time was already shut to prevent further protest at APC secretariat sited within the axis.
Confirming that the police was responsible for the actions, the command spokesman, Olumuyiwa Adejobi, in a statement released earlier that was obtained by The Guild, explained that the decisions to shutdown the road was to prevent any breakdown of law and order within the axis.
The statement reads in part: “Suffice to state that the presence of policemen at the APC party Secretariat along ACME Road Ogba, was a proactive measure being put in place by the command to fortify the Secretariat during and after the party primaries that were held on Saturday 29th May, 2021; and the policemen are still on standby at the party Secretariat.

“It’s pertinent to state that there was no protest or crisis recorded at the Secretariat to warrant any shut down or total closure of the APC Party Secretariat as wrongfully reported in some newspapers and the social media.

“The Commissioner of Police, Lagos State, CP Hakeem Odumosu, therefore refutes the referred publication and appeals to the general public to disregard it as the Lagos State Police Command will not in anyway act in divergence to the extant laws of the land and ethics of the Nigeria Police Force”.