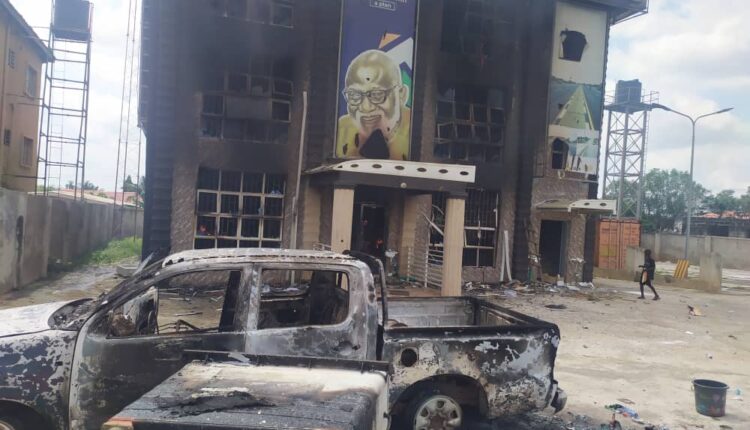 Ondo State on Thursday witnessed it share of arson ongoing across the country after mob set ablaze campaign office belonging to the state Governor, Rotimi Akeredolu, who recently got re-elected for the second term of four years.

It was learnt that the campaign headquarters situated in Akure, the state’s capital, was attacked by hoodlums and set ablaze after valuables and important documents were carted away.

Part of valuables carted away, it was gathered, were computers, electronic appliances and other office equipments with critical information.

Also, a vehicle belonging to the campaign headquarters was burnt during the attack by the mob and many other unidentified things destroyed during the incident.

As learnt, the youths were said to have regrouped for the attack after policemen tried to disrupt their demonstrations against police brutality which was in defiance to the curfew  introduced to mitigate violence in the state.

Confirming the development, the state Police Public Relations Officer, Tee-Leo Ikoro, said that the campaign office among other public infrastructures were attacked and torched down by the arsonist.

Other facilities attacked and torched down, he said, were secretariat of the Okitipupa Local Government Area and Okitipupa Divisional Police Station.