IGP orders security beef up around religious centers, others… 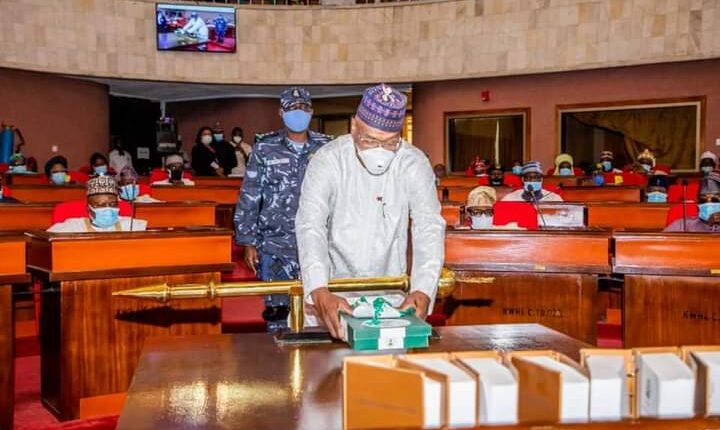 The Kwara State Governor, AbdulRahman AbdulRazaq, has presented the proposed 2021 budget of over N123 billion before the House of Assembly, with Minimum wage, education, youth empowerment considered as major priorities for allocations during the year.

Describing the fiscal document as a product of wide consultations with electorate and designed to reflect current economic challenges, AbdulRazaq said that the three were considered to have a great impact on the development of the state.

At the presentation before the lawmakers on Tuesday, the governor said that 54 percent of the budget was recurrent expenditure while 46 percent was allocated for capital expenditure, a fallout of the dwindling revenue from oil and Internally Generated Revenue (IGR).

He explained that the urgency to prioritise anti-poverty measures to cushion the effects of the general economic crisis on vulnerable households and small businesses amidst the COVID-19 pandemic was the reason for the allocation to recurrent expenditure.

On the minimum wage, the explained that the new wages would be paid immediately the government reach a deal with the labour as well as effecting promotion for different cadres of the civil service.

AbdulRazaq, however, hinted at the possibility of the administration taking bonds to finance key infrastructural projects later in the year.

Giving a breakdown of the budget, the governor said that education gulps a huge chunk of 25.5 percent of the proposal, an improvement from last year, followed by health which grabs 13.7percent. Economic affairs, a category that includes road construction and other infrastructural projects, is also taking another 25.7 percent, indicating the administration’s intention to spend its way through the current recession and other hardships imposed by the pandemic.

Also, the general public service, a budget subhead that deals with the civil service, he noted would receive  26.5 percent of total expenditure for the year.

The state budget was predicated on the same key parameters and fiscal assumptions as the national budget recently presented by President Muhammadu Buhari.

“The 2021 fiscal plan is built on the modest successes of the outgoing year, with strategic emphasis on reforms and inclusive growth. However, its fundamentals are dictated by the global economic realities, low revenue projections, and a need to prioritise basic needs of the people as we recover from the devastating effects of COVID-19. I will therefore be laying before you a budget estimate of N123,091,307,468. That is 7.35% bigger than the revised 2020 budget,” he told the Parliament.

“Our priorities in the new fiscal year would include payment of the new minimum wage, cash-backed promotion for workers who passed the recent examination, tech-driven reforms in the education sector through our Kwaralearn initiative, social security for the vulnerable, cottage industries, rehabilitation of sporting facilities, and investments in the ideas of our youths through Kwapreneur. Ongoing and new infrastructural projects such as the Innovation Hub, Visual Arts Centre, courtrooms and school rehabilitation, and upgrading of health facilities will also be funded.

“Agriculture remains top priority as part of our strategies for food security. Appreciable sums have been allocated to irrigation system, and purchase of fertilisers and farm implements. At least 10,000 rural women are to benefit from the Noiler programme which we are keying into.

“And nearly two years into the new administration, we have made provisions for purchase of vehicles for political office holders within reasonable limit.

“Given the huge infrastructural gaps across various sectors and our agenda for inclusive growth, we may take bonds in the new year to fund critical projects to attract investments and widen the economic base of the state.

“Our commitment to prudent management of public resources remains unshaken. We will also at all time prioritise the welfare of the people who have entrusted us with their mandate, while every segment of our society is accorded their right.”

The Governor said the outgoing year recorded appreciable infrastructural development and key interventions in various sectors, regardless of the financial crisis wreaked by the Covid-19 pandemic and the lockdown.

Apart from building and equipping an isolation centre with top-rated facilities, the government provided free malaria services across 450 public health centres, including those owned by military and police, while free surgeries were conducted for people, AbdulRazaq said. He added that 23 health facilities undergoing rehabilitation are at various stages of completion, aside state-of-the-art ambulances purchased in the year.

The government also cultivated 5,300 hectares of land for rural farmers at subsidised rates, even as it has designed a soon-to-be-unveiled agricultural master plan for the state, according to the budget speech.

He said while the government commenced works on 43 schools across the state, it completed the construction or rehabilitation of 32 roads, while it did repair works on 35 others in the outgoing year.

The administration started the construction of huge projects like the innovation hub and visual arts centre in the outgoing, the Governor said, adding that various interventions were undertaken across the tertiary institutions just as great strides were recorded in the water, sanitation hygiene (WASH) sector in Kwara State.

Responding after the presentation, the Speaker of the house, Salihu Yakubu-Danladi, commended the administration for the faithful implementation of the 2020 budget and commendable infrastructural strides despite the outbreak of the pandemic.

He said the lawmakers would discharge their duties to scrutinise the document and ensure it passes relevant thresholds of participatory democracy and good governance.