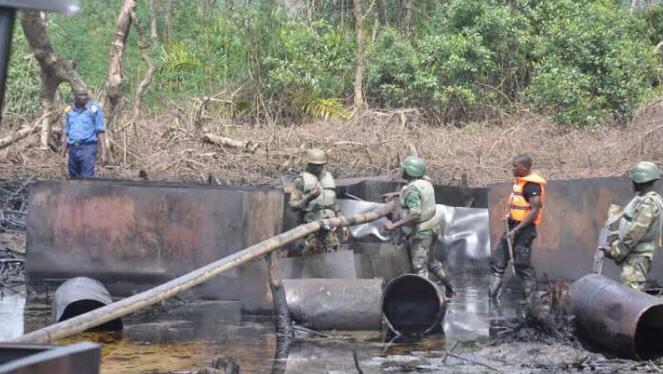 The Defence Headquarters has disclosed that several suspected oil thieves have been arrested and barrels of stolen crude oil recovered with numbers of illegal refinery sites and illegal pipelines in the Niger Delta destroyed by the military.

It said that the troops have also intercepted and confiscated contraband vessels in the region in the last two weeks.

As stated, the feat was in line with the military intensified aggressive fight against crude oil theft, pipeline vandalism, bunkering, economic saboteurs and other criminal activities across the country.

The Acting Director, Defence Media Operation, Brig.-Gen. Bernard Onyeuko, said that the operations were carried out between June 3 to June 16 in the Niger Delta.

Briefing newsmen while giving a weekly update on the operations of Armed Forces of Nigeria on Thursday in Abuja, Enenche said that the Nigerian Troops of “Operation Delta Safe’’ located and deactivated illegal oil refining sites at Ibaa in Emohua Local Government Area and Kumufari and Yalama towns in Asari-Toru Local Government Area of Rivers.

Onyeuko said the troops apprehended the criminals during their anti-illegal oil bunkering and raid operations and thwarted activities of economic saboteurs within the period.

He explained that several barrels of illegally refined PMS and AGO were impounded and storage tanks immobilised during the operation.

Onyeuko also disclosed that troops on the same day arrested some criminals disguised as lunatics, who were in possession of some stolen and illegal items.

He listed items recovered from them to include several fake military barrack permit ID cards and military uniforms at Tipper Garage and Navy Scrap Yard in Uvwie Local Government Area of Delta.