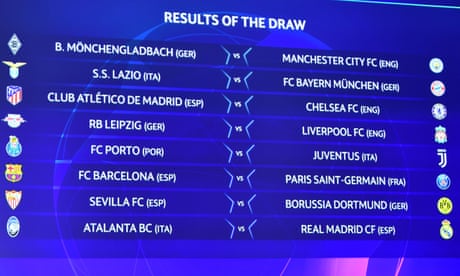 During the fixtures scheduled for next year’s February, the duo would thrill football fans to effortlessly dribbling skills capable of making opponents go crazy and round leather games fans get stunned.

The 2021 Champions League knockout phase promises to be interesting after the last season’s beaten finalists, Paris Saint-Germain, will be fighting it out with Barcelona in the last 16.

This is coming as Chelsea will be facing Atletico Madrid in the same stage while six times winner, Liverpool will play last year’s semi-finalists RB Leipzig.

Bayern Munich, who beat PSG in 2020 final, will play Lazio in the knockout stage and Pep Guardiola’s Manchester City team, still seeking a first Champions League title, must get past Borussia Moenchengladbach.

Chelsea faces a tough tie against Diego Simeone’s side, who are second in La Liga, level on points with Real Sociedad with two games in hand.

The ties will take place over two legs, with seeded group winners playing away in the first legs and at home in the return matches to take place in February and March next year.

Below are the full draw