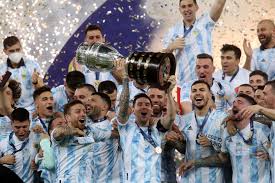 The Argentine football legend, Lionel Messi, ended his wait for a first major international title after guarding the country’s national team to defeat Brazil 1-0 at this year’s Copa America final.

Aside from lifting the trophy, Messi finished the tournament’s joint top goalscorer with four goals and was elected joint best player along with the Brazilian forward, Neymar.

The victory was Argentina’s 15th Copa America triumph which brought them to par with Uruguay as the all-time leading winners of the competition hosted every four years.

Their win extended their sequence of undefeated matches to 20 under Lionel Scaloni and handed Brazil their first competitive defeat since they lost to Belgium in the quarter-finals of the last World Cup.

Paris Saint German forward, Angel Di Maria, who started match, marking his second at the tournament, justified the coach confidence after scoring the opener midway through the first half, particularly at exact 22 minutes into the tension soaked encounter.

Renan Lodi failed to cut out a long ball forward from Rodrigo De Paul and Di Maria lobbed the stranded Ederson with aplomb.

Brazil piled on the pressure in an exciting second half but even with five strikers on the field they could not get an equaliser against an Argentine defence protected by the outstanding Rodrigo De Paul.

The defending champions, Brazil, were disappointed after their only chances of note fell on the laps of their striker, Richarlison, and Gabriel Barbosa forced saves from Emi Martinez, the Argentine goalkeeper.

In a contrast of emotions, Messi’s opposite number 10 and former Barcelona team-mate Neymar sank to his knees in tears at the final whistle, as his own personal pursuit of international success continues, having missed Brazil’s 2019 Copa win through injury.