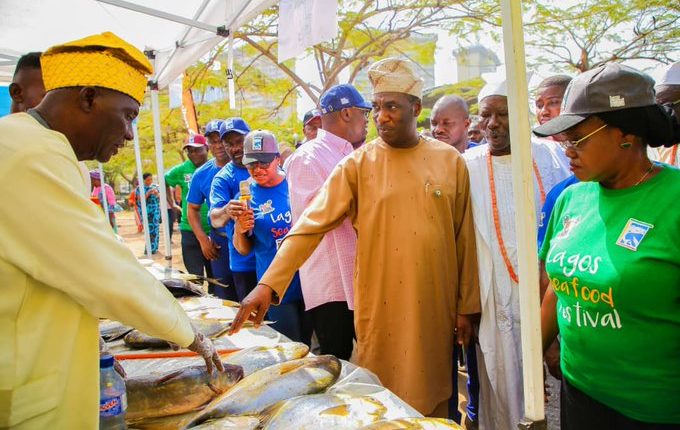 Lagos Governor, Babajide Sanwo-Olu has disclosed that merging Nigeria’s potentials in tourism and agriculture sectors will not only foster economic growth, but also create jobs, reduce poverty and unleash opportunities for entrepreneurship in the state.

Sanwo-Olu noted that within the agriculture value chain there exist potentials for increased production towards the attainment of the state food security objective, foreign exchange earnings from export and ultimately contribute to the growth of the Country’s Gross Domestic Product (GDP).

Speaking on Sunday at the 2019 Lagos Seafood Festival, with the theme “Celebrating the Seafood Diversity of Lagos State”, the Governor argued that for Lagos, it is endowed with potentials from both sectors especially aquaculture.

“You will all agree with me that Lagos State is endowed with natural landscape traversed by sea and lagoon waters as well as beautiful beaches and waterfronts. 22% of the state’s total land area is covered with water and 180km coastline along the Atlantic Ocean,

Sanwo-Olu, who was represented by his Deputy, Dr. Kadri Obafemi Hamzat, added that these unique endowments give the State a comparative advantage in seafood and tourism business which are yearning to be tapped, harnessed and developed for the socio-economic transformation of the state.

He stated further that to ensure a geometrical increase in fish production with active participation of private sector, the state government has initiated several projects in agricultural space which include establishments of Fish Farms in Ikorodu and Epe.

According to him, “While the Ikorodu Estate is fully subscribed and produces 10,000 tons of fish per annum, the Ketu Ereyun, Epe Estate will produce 11,000 metric tons on completion of its first phase”

While noting that the Seafood festival presents a unique opportunity to showcase Lagos State aquaculture and seafood potentials to local and international markets as well as stimulate tourism growth.

Earlier in his address, Lagos State Commissioner for Agriculture, Gbolahan Lawal disclosed that Lagos Seafood Festival was designed to boost development of the creative industry and promote visibility of the state as a tourist destination in alignment with entertainment and tourism pillar of the state government’s T.H.E.M.E.S Development Agenda.

He added that in accordance with this year’s festival theme, the rich seafood diversity of the state will be projected through display of various fresh, processed and wide varieties of seafood based dishes by the exhibitors, adding that it is strengthened by the fact that fishing is main occupation of people living in coastal zones and along the vast lagoon network of the state.

Speaking further, the Commissioner emphasized that entertainment and show business are major activities in Lagos that provides employment for youths and significantly contribute to the State’s GDP.