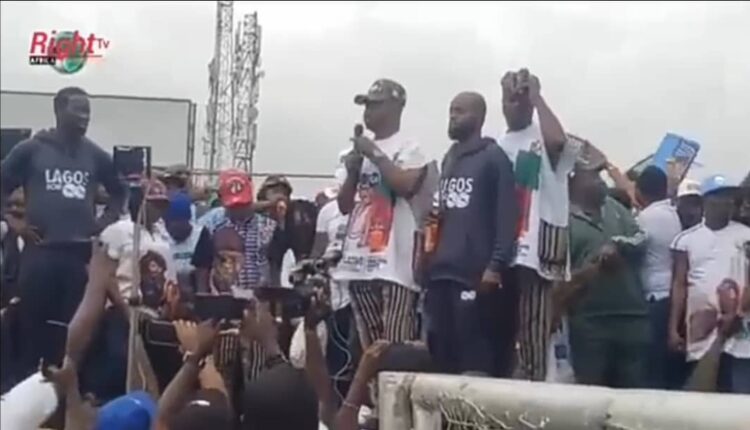 At a time when Nigerians both online and offline are already letting go controversial Lekki tollgate shooting and other series of violence that played out throughout the EndSARS protest in Lagos and other states, the Lagos State Park and Garages Committee Chairman, Musiliu Akinsanya popularly called Mc Oluomo, has accused Peoples Democratic Party (PDP) presidential candidate, Atiku Abubakar, and his Labour Party contender, Peter Obi, of being individuals behind the October 2020 EndSARS protest

MC Oluomo has claimed that Atiku and Obi deliberately sponsored the protest in order to discredit the All Progressives Congress (APC) presidential candidate, Bola Tinubu, and bring down the Yoruba race just as he insisted that no one died at the Lekki tollgate during shootings contrary to allegations that several protesters were killed at the spot after military men invaded the place.

Barely two years after the incident, the parks, and garages chairman maintained that all events that played out on October 20, 2020 were political games planned by politicians and their supporters to drive cheap popularity for themselves.

Speaking during a rally put together by Lagos parks and garages team, yesterday, to show Tinubu’s strength in the state, MC Oluomo said that since the event of Lekki shooting no family had shown up laying claims of losing their loved ones. and that the government had waited so long to receive complaints from members of the public.

The chairman noted that the strategy by those alleging that APC presidential candidate masterminded attacks on EndSARS protest was basically to ensure that the Tinubu and Yorubas become less relevant in political calculations in the country.

“It is a political game by Atiku and Obi, who both conspired and instigate people to accuse Asiwaju of being the brain behind attacks on protesters in Lagos”.

The National Union of Road Transport Workers (NURTW) former chairman in Lagos argued that if the allegations raised against the ex-governor were real, many questions surrounding the Lekki tollgate shooting would have been answered.

“After the Lekki tollgate shooting, they claim that people died but to date, no one has been able to show us corpses from the scene or where one of the protesters was buried as proof.

“Also, if truly people died at Lekki tollgate, are there no relatives of such victims in the country that will be demanding justice on his behalf after the attack.

“Another question we should argue out is that Asiwaju is not the President or Chief of Army Staff that can order the military men to shoot at the tollgate. All these were tricks to deceive us and make us believe Tinubu is the one behind all that happened at the place.

MC Oluomo stressed that all that had played out after the demonstration and the attacks that followed it were politically motivated by gladiators that were afraid of Tinubu and had vowed to de-market him.

“All these are political games and I want you all to get ready and vote for the APC presidential candidate during next year’s election in the country”, he added.

Meanwhile, the African Action Congress (AAC) has condemned the comment made by the parks and garages boss, and demanded that he must be prosecuted over the unguided utterances.

While describing the comment as unfortunate, the party stated that the prosecution should not hinder him from apologizing to Nigerians both dead and alive for opening an old wound both in the hearts of Nigerian youths and the direct victims; those who lost their loved ones.

In a statement by the National Publicity Secretary of the AAC, Adeyeye Olorunfemi, on Monday, the party stressed that MC Oluomo’s comment would not deter Nigerians seeking justice for the deceased protesters across the country.

According to him, “The AAC seizes this medium to respond to the very unfortunate statement uttered by Alhaji Akinsanya, a supporter of the APC presidential candidate, during his sponsored Lagos rally that was held yesterday, October 9, 2022.

“In the viral video sighted online, Musiliu Akinsanya “MC Oluomo” was seen asking Nigerian youths who participated in the biggest anti-police brutality protest nauseating questions about the Lekki massacre, with the claim that it was phantom: “where are the bodies?”, “Where are their relatives?”, “where were they buried?”

“It is rather unfortunate that while our comrades and other reputable Nigerians are struggling to seek justice for #EndSARS victims, both dead and alive, and as the second #EndSARS memorial draws closer, the transport boss would seize this time, just in the bid to open old wounds, both in the hearts of Nigerian youths and the direct victims; those who lost their loved ones, and livelihood during the Lekki Massacre of October 20, 2020.”