Masquerade, two others die during auto crash in Lagos 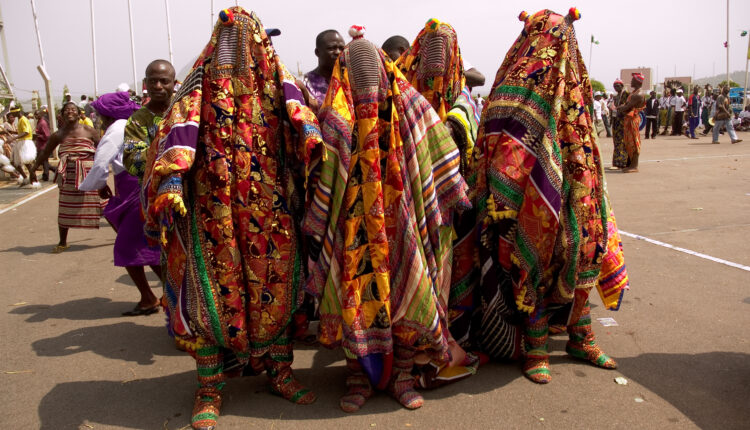 Inspite of myths surrounding spiritual power around masquerade in Lagos and other southwest states, a truck has been confirmed to have crushed a masquerade to death, putting an end to the spiritual power often believed to be possessed by residents of the region.

Aside from the masquerade, two other persons, a driver, and his motor boy, were also crushed and died during the auto crash that was said could have resulted in clashes but for the intervention of policemen from Area D Command in Lagos.

The tragedy that claimed the lives of the masquerade and the two others was said to have occurred yesterday along the Isolo road around 2:30pm.

It was learnt that the truck, which was loaded with plywood, crushed the driver as well as motor-boy and masquerade while on a display around the market axis on Isolo road.

Following the tragedy, the angry traditionalists gathered and attempted to lynch the driver, setting the truck ablaze to express their anger over the development.

The driver of the ill-fated truck reportedly fled to the nearby Area D Command while the mob stormed the police station to demand that he should be handed over to them for jungle justice.

The request was however turned down by the police and it resulted in chaos at the station as vehicles were making detour from the area with the Expressway blocked by the traditionalists.

With the crowd becoming unruly and riotous, the police fired teargas canisters to disperse the crowd, causing protesters and other road users to scamper to safety.

The sound of the teargas and effect on their eyes forced people many residents to run covering their nostrils and mouths with their hands to further minimise the effect of the teargas.

The Lagos State Police Command spokesman, SP Benjamin Hundeyin, confirmed the incident but added that it had been brought under control.