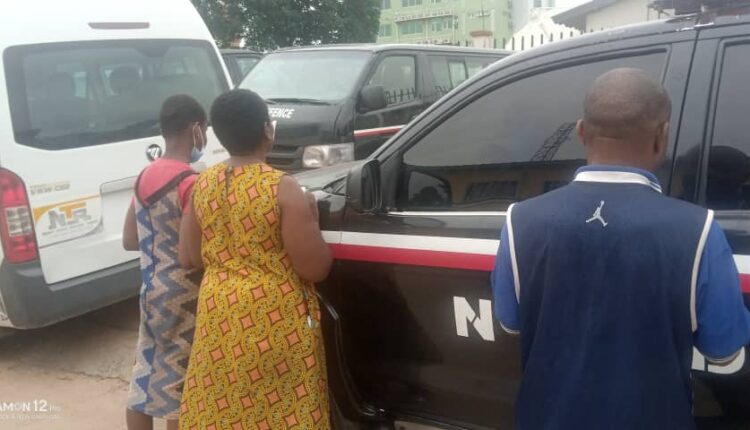 A 48-year-old man, identified as Charles Ekwe has been put under detention for sexually assaulting a 13-year old girl, after he was arrested by officials of the Nigeria Security and Civil Defence Corps (NSCDC), in Ojo axis of Lagos State.

Ekwe was said to have been having carnal knowledge of his wife’s niece when alone at their apartment in Surulere Street in Ojo after his wife must have left for work.

It was gathered that Ekwe had threatened to kill the 13-year-old girl should she try to narrate the incident to anyone, including his wife.

Confirming the development, the Lagos State’s NSCDC Commandant, Ayeni Paul, said that the suspect had been engaging in the act after he introduced her victim to pornography earlier in 2020.

Briefing newsmen on Tuesday in Ikeja, Paul hinted that the victim had been living with the family after she lost her dad four years ago and that the incident came to the fore when the suspect’s wife, blessing noted changes in her niece and began a discreet investigation.

He noted that upon further probing, the victim opened up to her aunt and explained that her husband had been sexually abusing her since beginning of the year, a development she claimed, became constant during the lockdown occasioned by coronavirus pandemic.

Paul said that the NSCDC officials swung into action after Blessing reported the incident with test result from the hospital confirming that the suspect penetrated his victim.

The NSCDC boss said that when interrogated, the suspect denied the allegations of penetration, saying he only fondled the victims genital after watching pornography with her.

On his part, Ekwe denied having carnal knowledge of his wife’s niece, stressing that his wife was only coming up with the allegations to quit the marriage and bring his name to disrepute.

The suspect said contrary to allegations levelled against him, the said victim was not always at home with him but with their neighbours in the next compound with several boys who could have engaged in the act with her.

“I agreed to the act because there was nobody to help me or speak for me, the case is already two against one and since they have brought me here, I have to accept and beg for forgiveness,” he said.

On her part, Blessing revealed that she had caught her husband and the victim in the act which they tried to hide on several occasions when she barged into the house.

“At first, she does not want to tell me what happened but after I threatened to beat her, she started crying that ‘daddy’ has been sleeping with me and warned me not to tell anybody.

“Even my stepdaughter that visited me when she was 15 years old, she tried the same act with her but when I confronted him, he denied and because of that, she has refused to step her foot in my house,” she recounted.