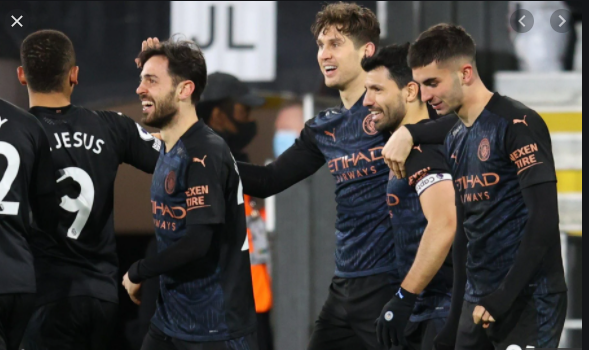 Manchester City has further edged closer to lifting the 2020/2021 Premier League Season after defeating its London opponent, Fulham 3-0, and extended total point to 71.

With the victory, Man City has extended their lead over their closest and city rival, Manchester United, by 17 points to remain at the league summit for the season.

Playing its 30th league match at Craven Cottage on Saturday, the league leaders could not breakdown the Fulham defence during the first 45 minutes but the second half was different with the league leaders scoring three times to secure the three points.

The home team could not withstand the firepower of Pep Guardiola team who broke the deadlock at the 47th minutes through John Stones with a close-range finish.

Fulham, with their Nigerian defender, Tosin Adarabioyo, nine minutes after succumbed to their opponent’s pressure, allowing Brazilian striker, Gabriel Jesus, to pounced on a defensive lapse and notch a second.

Even after the second goal with Fulham obviously not ready to upturn the game, the Manchester team made it all three goals with Sergio Aguero opening his account for the season from the penalty spot after Ferran Torres was fouled in the box.

With the victory, Pep Guardiola’s men hold a 17-point lead at the top of the table, while Fulham remains in the English Premier League relegation zone.

Fulham are next in action against Leeds United at home next Friday while City face-off against Borussia Monchengladbach in the second leg of their Champions League round-of-16 clash on Tuesday in Budapest.