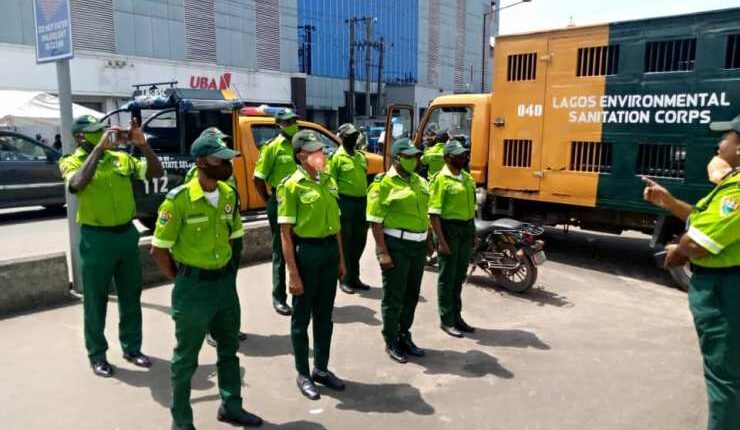 A Lagos State Mobile Court at Bolade-Oshodi has sentenced one Kola Gbadeyinka to four months imprisonment for impersonatiing operatives of the Lagos Environmental Sanitation Corps (LAGESC) in the state.

Gbadeyinka, who pleaded guilty before the court, was arraigned by LAGESC alongside Mathew Ilesanmi, were discovered to have impersonated the agency and extorted residents across the state.

While Ilesanmi pleaded not guilty to a two-count charge bordering on Breach of Public Peace and Impersonation, both punishable under Section 168 (i) (d) and Section 78 of the Criminal Laws of Lagos 2015, Gbadeyinka, meanwhile, accepted the allegations and pleaded that the court be lenient with him.

Following Ilesanmi’s stance, the magistrate adjourned the case till the 23rd of September for further hearing, and sentenced Gbadeyinka to four months in prison without an option of fine.

Speaking on the suspects crime before the court sitting, the Corps Marshal of the Agency, CP Gbemisola Akinpelu (retd), in an interview with newsmen on Friday at the Agency’s Command Headquarters, Bolade-Oshodi, stated that both suspects were arraigned for impersonating the Agency across the state.

Akinpele stated that both men go around the state with fake identifies and that they were arrested by men of the agency following a tip-off from members of the public on their activities across the state.

According to her, ‘‘the three suspects identified as Mathew Ilesanmi 36, Gbadeyinka Kola 64 and Kehinde Akinmoyero at large portrayed themselves to be LAGESC personnel popularly known as KAI by arresting a victim for open urination around Abiola Garden Ojota’’.

She explained that a concerned citizen alerted the Agency of the illegal activities perpetrated by the three suspects after arresting a man for open urination and subsequently demanded money before the man could be released.

The Corps Marshal further disclosed that the Intelligence Unit of the Agency was immediately mobilised to track and arrest the impersonators.

Akinpelu, therefore, in a statement released by Head, Public Affairs Unit for the agency, Adebayo Kehinde, urged members of the public to be wary of fake persons who are out to engage in illegal activities of extorting innocent citizens by impersonating the Agency.

She, meanwhile, cautions Lagosians to avoid open defecation and other environmental infractions, noting that real LAGESC personnel who are always properly dressed with their name tags attached to their uniforms are out to ensure that all the nooks and crannies of the State are free of any form of environmental nuisances.