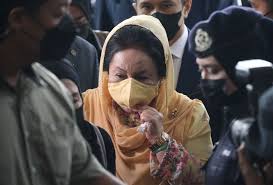 The wife of the former Malaysian prime minister,Rosmah Mansor has been sentenced to 10 years in prison for soliciting and receiving bribes in exchange for government contracts.

The sentence is said to be coming one week after her husband was sent to prison for corruption linked to the multibillion-dollar 1MDB scandal.

Mansor was said to have pleaded not guilty to three charges of soliciting bribes and receiving £1.3 million in exchange for helping a company secure a contract to provide solar power to schools.

The high court judge Mohamed Mazlan said that the prosecutors proved their case beyond reasonable doubt.

During the court proceedings on Thursday, the judge added that her defence was bare denial and unsubstantiated.

As gathered, Rosmah also faces a fine of 970m ringgit. She can seek bail while she appeals against the judgment.

The verdict on Thursday comes just over a week since Najib began a 12-year sentence for breach of trust, abuse of power, and money laundering in a conviction linked to the 1MDB scandal, one of the world’s biggest financial frauds.

Najib and Rosmah have faced various charges since he lost an election in 2018 amid public anger over huge corruption during his administration.

In the aftermath of their election defeat, the couple sought to leave the country by private jet, according to a flight manifesto leaked at the time. They were banned from travelling by the country’s then leader, Mahathir Mohamad.