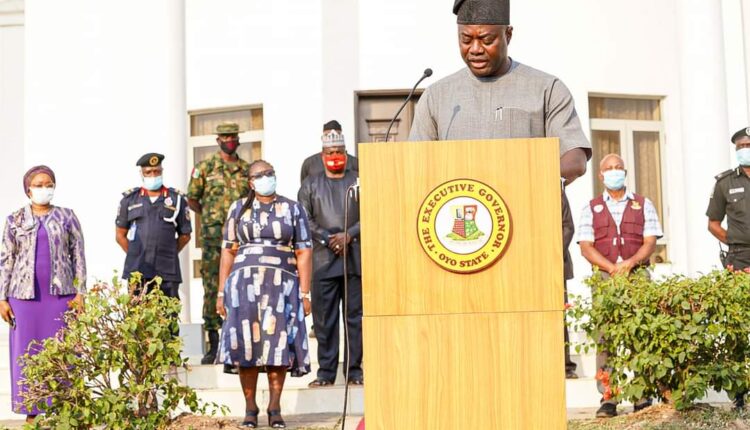 As part of measures aimed at protecting lives and property in Oyo State, the state Governor, Seyi Makinde, has disclosed that plans are being concluded to begin stakeholders meeting on smooth working relationship between the Nigerian Police Force and the newly-introduced Oyo State Security Network Agency also known as Amotekun Corps.

Aside from the duo, the governor noted that his administration would also be working with other security agencies to end kidnapping and other forms of insecurity in the state in sustaining the peace currently being enjoyed.

He said that the inter-agency collaboration which the state sought to achieve through the stakeholders meeting had become imperative after the noticeable friction between the police and Amotekun corps in the state.

Speaking yesterday while briefing newsmen at the Government House, Agodi, Ibadan, Makinde maintained that his government was already setting up proper information channels for security agencies such that would enable free flow of information among all security outfits.

According to him, security of all residents of the state remains a top priority for our government and we will do all that is necessary to protect our people while tackling cases of kidnapping and other forms of unrest.

“The safety and security of all residents of Oyo State remain our top priority. We will continue to work relentlessly to tackle cases of kidnapping and insecurity in our state. We are also putting in place other policies to address insecurity, especially with regards to youth restiveness,” he said.

Makinde, who warned that some individuals who want Amotekun to fail had been assailing it with all sorts of misinformation and fake news, maintained that the community policing model remains the only way to solve the insecurity challenge in the country.

He stated that the state will not sit idly and watch any Amotekun operative operate outside the ambits of the law and that it would also not yield to blackmail against the new agency.

He added that the state has identified that there was presently some friction between the Amotekun and Nigerian Police in the state, adding that the state would set up a committee to iron out the frosty relationship between the two institutions and bring about an alignment in their operations.

“Amotekun is not operating in a vacuum. They are a creation of the law of the state. The Nigerian Police is a creation of the Constitution of the Federal Republic of Nigeria. It is normal that we have inter and intra agency friction where possible, but we will get everybody together and seek alignment towards the same end basically,” the governor said.

He added: “For the past six weeks that the Amotekun was deployed, we have seen various reports in the news. Most of these reports are good and a few are bad. And of the bad, quite a number are false information and fake news. For example, some newspapers carried the news that Amotekun killed 7 fulani herdsmen in Ibarapa. “Such a story was circulated to stoke ethnic tension. Even some reputable media fell for this. Whereas, the real story was that Amotekun worked with the community members, including genuine herdsmen to flush out bad elements in that zone.

“It has, therefore, become necessary to put the good people of Oyo State on high alert. Each time you see a news item, you want to ask yourself if it is believable or just some no-good-people at work. I have to tell you that there are people among us that don’t want Amotekun to succeed and they will use lies and disinformation to push their agenda. We must realise where we are coming from and where we really want to be.

“Community policing is the way forward and we have to make it work. If somebody says he is abused by Amotekun and cannot pinpoint the Amotekun personnel in such an area, you are probably not from that neighborhood and you are a fake news carrier.

“So, as I always say, I know we do have trust-deficit between the people and the authorities, and this makes it easier to think the worst of people in authority. But we should not cut our nose to spite our face. We must find a balance so that we do not turn the people trying to protect us to our enemies.”

The governor, however, charged anyone with a genuine case against the members of the Amotekun Corps to come forward with their grievances by using any of the feedback channels put in place by the government.