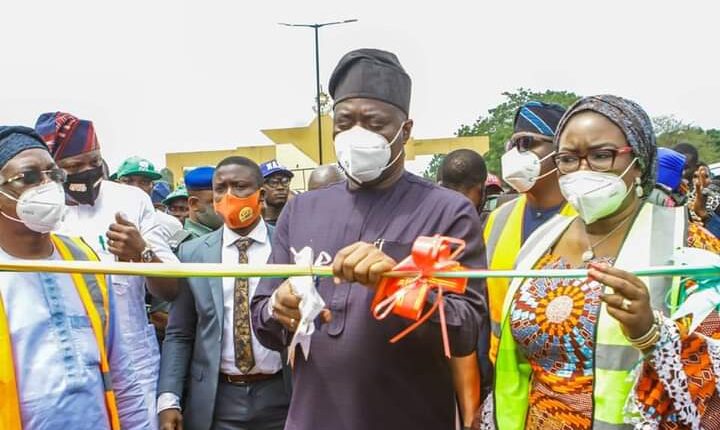 As part of his commitment towards delivering on his campaign promises, the Oyo State Governor, Seyi Makinde, has flagged off phase two of the Light-up-Oyo project and the reconstruction of Under-G-Stadium, LAUTECH 2nd Gate Road, Ogbomosho.

He explained that the project was expected to cover 223.48 kilometers selected roads across the geopolitical zones in the state, adding that the phase one in Ibadan was already at 87.5 percent completion.

Makinde noted that the infrastructural project being embarked on was in line with his administration’s four pillars of roadmap to accelerated development in Oyo State 2019 -2023.

He explained that the project which was awarded at the cost of N28,360,975,609.76 would be financed through the contractor’s project financing scheme, with his government contributing an initial counterpart fund of N2,836,97,560,97.

The governor also noted that the contractor would finance the project and that the state government would commence refund after each 50 Kilometres of road have been illuminated, stressing that the entire repayment plan would be spread across 84 months.

“Apart from providing illumination, the street lights will also have Wifi and CCTV cameras incorporated into it,” Makinde said.

On his part, the Permanent Secretary, Ministry of Public Works and Transport, Adebowale Balogun, explained that the reconstruction of 3.0km length of Under G-Stadium LAUTECH 2nd gate road is aimed at improving the capacity of the road, and as well eliminate friction and congestion being experienced while plying the road.

He added that the road would improve transportation for road users, particularly the students and members of the University community.