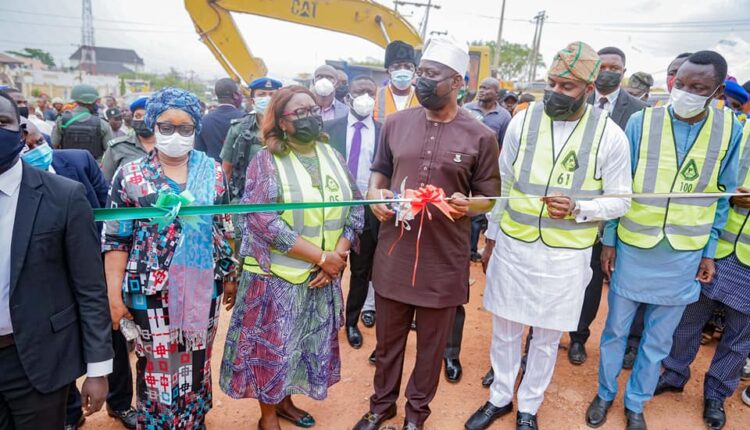 Oyo State Governor, Seyi Makinde, has flagged off construction of N1.05 billion fly-over across Idi-Ape-Basorun-Akobo road in Ibadan, the state’s capital, to ease traffic gridlock across the area.

He also declared that the state was saving about N400 million from the failed contract awarded by the immediate past administration in the state through the project.

Makinde maintained that the state government would put machinery in motion to recover the outstanding funds, which, he claimed, the previous contractor collected but didn’t work for.

The governor, who spoke at the brief flag-off ceremony at the foot of the overhead bridge, said that the flyover was vital to the socio-economic growth of the state.

The governor said that the construction of the project would curb the menace of gridlock that usually characterized vehicular movement on the road.

He disclosed that the 65-meter fly-over was contracted to Messrs Peculiar Ultimate Concerns Limited “for a completion period of six months through the Alternative Project Funding Approach.”

He equally charged the people of Idi-Ape-Basorun, Akobo areas to monitor the progress of the construction work and report any observation about the contractor’s performance to the government for necessary action.

According to Makinde, the contractor would finance the project up to 20 percent completion stage before the government would start paying on an installment basis for 12 months.

He also stated that his administration would continue to embark on projects that would enhance the economic development of the state.

Speaking earlier, the Commissioner for Public Works, Infrastructure and Transport, Prof. Dahud Sangodoyin, told journalists at the Secretariat, Agodi, Ibadan, that the State Executive Council approved the construction of the flyover.

“It covers a length of 65 meters excluding the abridged length of the road. It will serve the Akobo-Ojurin and Odogbo axis. It is part of the developmental agenda of His Excellency, Engineer ‘Seyi Makinde, to improve the socio-economic space of the state.

“So, we believe that this bridge, when completed, will give us the values for the money that will be spent on it. The project has been awarded to Peculiar Ultimate Concerns Limited and the completion time is six months. Let me add that our administration has been able to save a lot of money on this flyover simply because it was awarded by the last administration around 19th of May, 2017, and when we found out that the contractor was unable to perform, the contract was terminated in the year 2020. So, we have re-awarded the entire asphaltic layer to Fax Construction and left out the flyover part of it.

“So, yesterday (Tuesday), we looked at the cost of the contract, which was N1.464 billion in 2017, and the contractor that had worked on it exhibited slow performance, therefore, it was terminated. The state government had paid N368 million for the bridge works. Now, this new contract, which we are re-awarding to Peculiar Ultimate Concerns will cost about N1.058b and the difference is close to about N400million, which our government has actually saved,” he said.