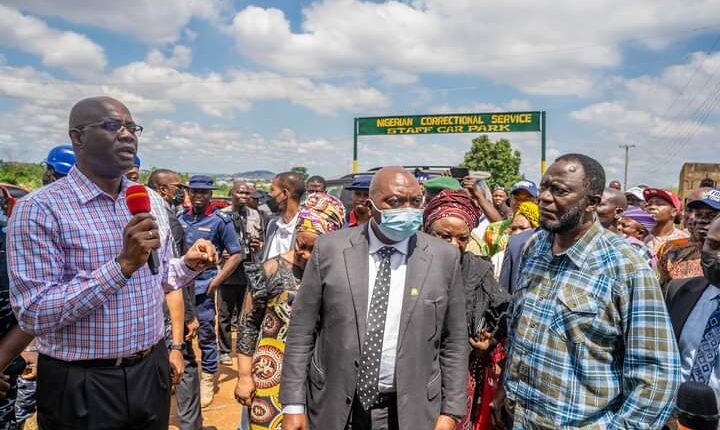 As part of measures to prevent attacks on correctional centres, the Oyo State Governor, Seyi Makinde, has ordered the immediate installation of Close Circuit Television (CCTV) cameras at the Abolongo Correctional Centre and other custodial facilities across the state.

Makinde also directed the state ministry of works to embark on immediate rehabilitation of roads that lead to the Custodial Centre, to facilitate easy access for law enforcement teams in the state.

The governor gave the directives on Sunday during an inspection of the Abolongo facility after gunmen freed dozens of inmates and killed two security personnel including a soldier during an attack that lasted for several minutes.

According to him, the CCTV cameras to be installed at the correctional facilities across Oyo would be connected to the State security control room to forestall future attacks.

He assured the prison officers that the government would do everything possible to ensure that security around the facility and across the state improved.

The governor, meanwhile, debunked claims that some of the inmates that fled from the custodial centre the high profile criminals, saying ​a number of them those being insinuated were not among the escapees.

Makinde implored people to remain calm saying problems of insurgency and banditry could only be addressed if the society enjoyed mutual confidence.

Earlier, the governor confirmed that no fewer than two security personnel died during the attack on the prison with explosives, and some inmates were set free. Our security men were ambushed.

“As a result, we lost two of our security agents, A corporal of the Nigerian Army attached to Operation Burst, and an Operative of the Oyo State Amotekun Corps, Tijani Babatunde.

“Aside from the two lives lost, we had several operatives injured. I must mention that one of our Amotekun female volunteers, Shukurat Omoba, is presently in critical condition.

“Although some inmates have been recovered and taken back into custody, some are still at large. All security agencies have been placed on high alert to ensure that all that escaped are rearrested and returned to custody.

“I am therefore using this opportunity also to put the citizens on alert. There is no better time to repeat the call to action: if you see something, please say something.
“These criminals would want to go to areas where they will not be easily rearrested. If you spot any unexplained strangers in your community, please call the 615-security emergency number immediately, and make a report.
“I have directed the security agencies to deploy personnel to critical national assets within the state and to monitor all entrance and exit points across the state”.