Buhari turns down amnesty option for bandits, other… 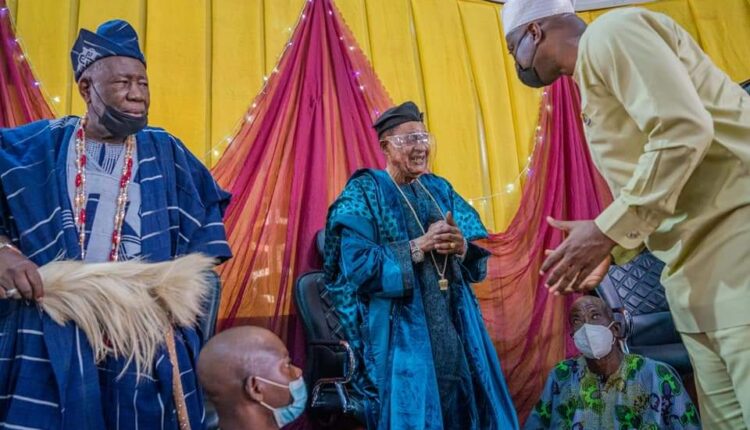 Oyo State Governor, Seyi Makinde, has declared that his administration would continue to work with traditional rulers in all the nooks and crannies of the state to tackle insecurity, adding that his government would equally continue to protect the lives and property of citizens.

Makinde maintained that as part of measures to improve the security situation in the state, his administration has set up a Security Task Force comprising cabinet members and heads of security agencies including Operation Burst and Amotekun.

He added that the government has equally introduced the voluntary policing approach in which non-state actors would work together with other security agencies to tackle insecurity in the state.

Describing them as all-important stakeholders in the issue of security, the governor called on traditional rulers to join hands with the state government to improve the security of the state.

Makinde stated these during a meeting with traditional rulers and security agencies, held at the House of Chiefs, Secretariat, Agodi, Ibadan.

The meeting had in attendance the Alaafin of Oyo, Oba Lamidi Olayiwola Adeyemi III; Olubadan of Ibadan, Oba Saliu Adetunji, Aje Ogungunniso I; a representative of the Soun of Ogbomoso; members of the Oyo State Traditional Council; the Commissioner of Police, Oyo State Command, Mrs. Ngozi Onadeko and other security commanders, among others.

He added that the government would collaborate with traditional rulers to improve the security of the state, as, according to him, intelligence gathering would not succeed without getting closer to the people, especially the royal fathers.

He said: “I have said before that security cannot work without intelligence gathering and we cannot gather intelligence without getting closer to the people. In all of the troubled areas across our state, the royal fathers often get information before we do, and that is why it is important that we must collaborate with you.

“The reason we are in this meeting today is because security is one of the four pillars of our administration, and one of our key policies as contained in the roadmap for accelerated development in Oyo State (2019-2023).

“There are actually four cardinal points, which this administration is standing on. We have Health, Education, Expansion of our Economy and Security. So, If Oyo State is to continue on the path to economic growth, then, the state’s security architecture must be maintained.

“So far, Oyo State is doing well economically and this is as a result of the policies which this administration has put in place. For example, the February 2021 inflation report for all food items showed that Oyo State has the lowest inflation rate in the country.

“While other states are battling with increases in food prices and other things, in Oyo State, the cost of transportation, housing and food items, including bread, yam, fruits and vegetables, have remained stable. But if we want to continue to enjoy this stability, we must ensure that we maintain a secure environment.”

The governor equally explained that the state’s Security Task Force was set up as a matter of emergency to address the various security challenges and ensure that the state is always on top of security situation.

He added that the committee would regularly link up with traditional rulers and stakeholders across all local government areas to have requisite information on happenings across localities.

“Earlier this month”, he continued, “we reviewed the security situation and it has stabilized a little bit but the improvement is not what we want, as it is marginal. I would like to take this opportunity to thank our security agencies because they are trying their best. They have been responsive but there is still a lot to do.

“After the evaluation of our situation, we decided to set up the Security Task Force/War Room. We call it the War Room because the situation we are faced with is war in the sense that Oyo State people must sleep with their two eyes closed. And until they are able to do that, we also will not sleep.

“So, we had our inaugural meeting and since then, we have been meeting weekly to address security issues. Why I set it up as a Task Force was because this time last year, when the COVID-19 came, we set up a Task Force. Members were meeting every 48hours for almost six months; and afterwards, we made it a weekly meeting and, by the grace of God, we led the entire country in tackling that pandemic. So, it is an approach that has worked for us and we know that it will work for us in tackling the insecurity issue too.

“If our plans are to work effectively, we need the buy-in of everyone in Oyo State, but most importantly, you, our fathers in each of our communities, we need your buy-in and that is why I have invited you for this meeting today.”

The governor, who sought the cooperation
and support of all stakeholders across the state to enable the state government have the right security information on a prompt and regular basis, said: “I called you here today not to threaten you but to ask you to work with this administration to tackle insecurity in our various areas of the state.

“We also know that if you understand why we are taking some measures against insecurity, you will be the ones in the best position to communicate this to our people. For instance, if we talk about people working in the mining area, some of our traditional rulers in Oke-Ogun will sign documents for those who need land for mining for peanuts. If we interact on what we desire to do, you can also advise us on the local situation in your areas.

“So, I believe that with this, misunderstanding about some policies of the government will reduce and that is part of why I have called this meeting. You are the ones who see some of these foreigners as they enter Oyo State and you can report when strangers have come in. You can give government information because you know whoever is accommodating strangers.”

The governor noted that the traditional rulers have demonstrated their support for the government and have shown that the security of the state is so paramount to them and must be maintained.

On the issue of voluntary policing, he said: “With the approach of voluntary policing, all non-state actors can also be reined-in and we need your support to achieve that. If you know some stubborn youths around your areas, they should go after the criminals,” he said, adding that the state government has directed that in all Local Government Areas in the state, there must be security meetings at least twice a month.

Makinde also assured the traditional rulers that his administration would continue to work on improving the security and, by extension, the economy of Oyo State, stating, however, that the country’s weak federal system has been a major constraint to the states.

“We won’t shy away from the assignment you have given to us. We won’t come back to you with excuses. Yes, there are constraints as the Kabiyesi [Alaafin of Oyo] has said. The peculiar federal arrangement we have is a challenge.

“But I give you the assurance that we will not throw our hands in the air and say it is because we don’t have a very smooth interaction between the state’s representatives and the people in Abuja.

“Whatever we can do will be done and with the support of everyone; the state actors, non-state actors and traditional rulers, I believe we will achieve a secure Oyo State.”