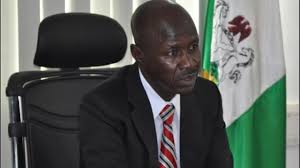 The Police Service Commission has approved the promotion of a Commissioner of Police and EFCC former chairman, Ibrahim Magu and 63 other senior officers across the country.

Magu, was said to have been promoted to Assistant Inspectors General of Police, (AIG) alongside seven others which include: Abraham Ayim; Okunlola Kamaldeen; Andrew Amieengheme; Akeera Younous; Celestine Elumelu; Ngozi Onadeko and Danladi Lalas.

In a statement released by the Commission’s Head, Press and Public Relations, Ikechukwu Ani, on Monday, in Abuja, it stated that earlier approval for the rectification of promotion date and proper placement of eight Chief Superintendents of Police and subsequently promoted them to the rank of Assistant Commissioners of Police.

On his part, the Chairman of the Commission, Musiliu Smith congratulated the promoted Officers and charged them to redouble their efforts in the service of their fatherland.

He further emphasized that the Commission would continue to monitor their performance and not hesitate to discipline any officer found wanting in the discharge of their duties.