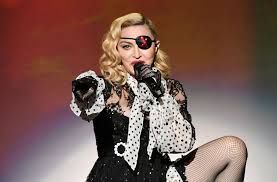 Italian pop-music icon, Louise Ciccone, popularly known as Madonna, has revealed that she had contracted the deadly coronavirus infection during a tour, after recovery from which, the artiste still tests positive for the viral infection.

She said that the disease had brought an abrupt end to her Paris, Madame X Tour, about seven weeks back, and that though she was not currently sick, it was normal that test results would return positive for the infection.

According to Madonna, the antibodies built by the human immune system would result in positive test results even after the patient had fully recovered from the disease.

The artiste, who confirmed the disease incident through a post made on her social media page, refuted claims that she was sick with the global pandemic and assured fans that she had fully recovered from the ailment.

She stated that though the infection had affected herself and various other artistes who had also been on the musical tour, the symptoms had been no more than a very bad flu from which all had later recovered.

“I am not currently sick. When you test positive for anti-bodies it means you HAD the virus which I clearly did as I was sick at the end of my tour in Paris over 7 weeks ago along with many other artists in my show but at the time we all thought we had a very bad flu. Thank God we are all healthy and well now”, she said.