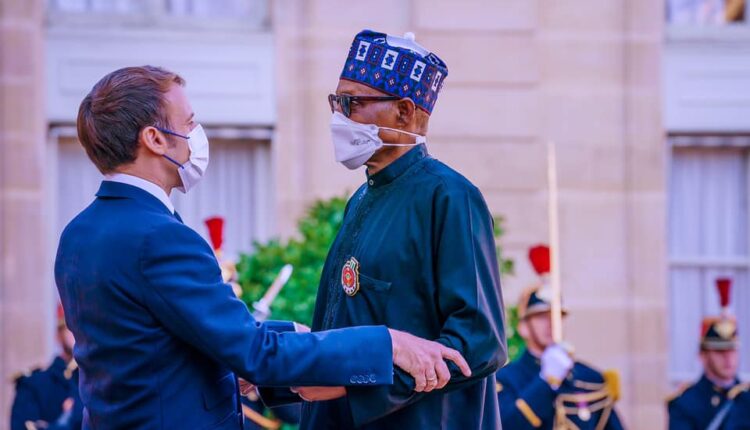 France President, Emmanuel Macron, has justified improved bilateral ties between Nigeria and France, saying Nigeria remains a powerhouse in Africa and that informs why his country was building tight and diverse cooperation with Africa’s most populous nation, nothing that there was urgent need for both countries to increase their trade volume.

He stated that Nigeria and his country shared many strategic interests and that the duo nations must be working toward strengthening the ties such that would benefits both countries and impact them positively in the areas of trade and others.

Macron stated this yesterday in Paris at the Nigeria international Partnership Forum (NIPF), a high-level event on the sidelines of the Paris Peace Forum. The one-day event was attended by President Muhammadu Buhari, ministers and business moguls from Nigeria and France.

The event was organised to bring together the Nigerian and French governments including private sectors in wide-ranging discussions focused on security, regional stability, trade and industrialisation. The event was also to attract investment to Nigeria, bridge existing infrastructure gaps, spotlight Nigeria’s immense trade and investment opportunities and reset false and distorted narratives about the country.

Macron who was represented by French Minister of Foreign Trade and Economy, Franck Reister, said that though France may seem a distant partner for Nigeria, even when it is surrounded by French-speaking countries with whom France shares a long history and have a strong foothold.

“However, the reality is actually quite different : because France mainly, is Nigeria’s second financial bilateral partner after China, with around 3 Billion Euros of loans to the federal government. Nigeria is also our first trading partner on the continent and a very strategic one in the oil and gas sector since more than 10 per cent of our gas supply comes directly from Nigeria.

“More than 100 French companies are present in Nigeria whereas almost 20 per cent of French Foreign Direct Investment in sub-Saharan Africa are directed to Nigeria. In 2019, the stock in Nigeria reached the very impressive amount of 9.7 Billion Euros and would like to stress that we have longstanding and intense cultural, academic and scientific relations,” he said.

He went further that, “our cultural and cooperation network in Nigeria is quite unique, with 11 cultural centers throughout the country, all dedicated to promote the ties between our two societies.”

Macron described France also as a great supporter of the vibrant cultural creativity of the Nigerian people, as witnessed for instance, during the recent Africa 2020 season. He noted that his country was committed to the stability of the Sahel region and the safety of maritime trade routes of the Gulf of Guinea.

Macron recalled that a week before now, the Nigerian Navy participated in the exercise Grand African Nemo, organised by the French Navy. He said that the successful operation underscored the great cooperation potential between both navies.

Macron, however, noted that in spite of these remarkable facts and figures, the trade relations between both countries had remained below its true potential.

“I believe that we have much to build together to give bilateral trade a new impetus. Nigerian people’s entrepreneurial spirit is also well known, and certainly the most dynamic among their peers in Africa. Of course, challenges remain on multiple fronts, and I commend the Nigerian government for tackling those topics head on,” he said.

Macron said that more than 100 French businesses in Nigeria had created more than 10,000 jobs in Nigeria and were supporting the local communities where they were based.

”French entrepreneurs are constantly setting foot in Nigeria to invest in a wide range of sectors, from energy to digital, from agriculture to environment. It is not always easy but their commitment bears fruits. And I encourage all French companies present today to follow on their footsteps and get inspired by their example,” he said.

Macron assured that both French authorities and companies were committed to support the ambition of turning Nigeria into a strong industrial country, less dependent on oil and gas and imports. He said that the commitment informed why the French Agency for Development had invested, over the last 10 years, in multiple sectors such as infrastructure, transports, energy, creative industries and sports.

“And this is also why the French Treasury has decided to allocate to your government a loan of more than 50 milion Euro which will be the first for the Treasury since 1990 and the first ever French loan in the healthcare sector in Nigeria,” he said. The president assured that the France-Nigeria Business Council would be a catalyst to cementing cooperation and investments.