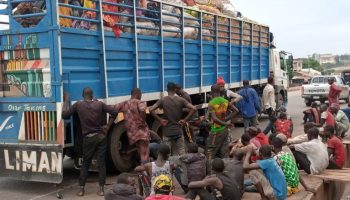 *While you and I are locked down and locked up massive trailer loads of able bodied disguised militia men are shipped in torrents down south apparently aided and abetted by powers that sent them on an undisclosed mission.

While you and I are locked down and locked up massive trailer loads of delinquents and unskilled young and adolescent boys are shipped in torrents down south apparently aided and abetted by powers that sent them on an undisclosed mission.

And prior to the time you and I were locked down and locked up trailer loads of commercial motorcycles and their riders along with quantum arms and ammunitions were shipped in torrents down south apparently aided and abetted by powers that sent them on an undisclosed mission.

Now the bulk of the entire country is encircled waiting for signals that will ignite the fire. It is no longer a secrete that thousands of trenches and cells have been created and manned in bushes, forests, villages, hamlets and even in towns and cities all over the country. It is only fools who would feign ignorance of what the ultimate mission is.

We have seen samples in Borno and Gombe. We have gory tales in Kaduna, Katsina, Zamfara and even Sokoto. We have horror videos from Plateau, Benue and Taraba. Ekiti, Kogi, Ondo, Delta and Imo have horrible stories to recount. Skulls are broken and pregnant women are disemboweled. Throats are slit and maidens, wives, mothers and even grandmothers are violently raped. Kidnapping for ransom has become a pastime.

And all we do is to deface pages of newspapers, magazines and social media outlets with trailer loads of lamentations.

“Nigeria is in serious danger” is part of the items in our trailer load of lamentations. Let us push the trailer load into the sea today. There are human beings in the 36 Houses of Assembly in this country. There are over one hundred Senators representing every community in the country. All the armed and unarmed forces have representatives from all over the country. There are 36 self styled Executive Governors! And none of them feels concerned about the gory spectacle about to engulf the whole country. And if they do, they have been criminally silent. Don’t let be said that when Nigeria was about to be burnt, your greed, your legendary bribe taking, your selfishness, your stupid and unrealistic ambition, your monumental cowardice, your indifference and your heartlessness padlocked your mouths.

Man! All of you should be courageous enough to stop this imminent slide into unprecedented anarchy that is poised to make Afghanistan, Syria, Somalia, Iraq, Libya, Yemen, old Yugoslavia pale into insignificance. Remember that United Nations is world’s largest TALKSHOP, a toothless bulldog. Remember the US, China, UK, France, Russia are only interested in selling their weapons to senseless countries!

My heart bleeds for millions of innocent mothers, fathers and children that are waiting to be hurled into mass graves or driven to refugee camps across the world. Oh, sorry, that is another lamentation!*