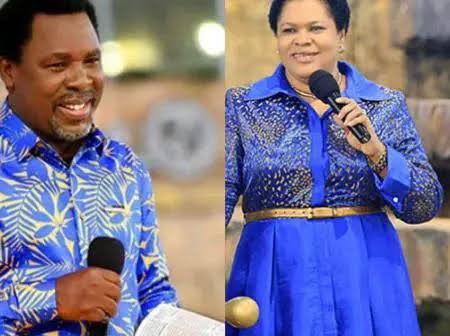 Wife of Temitope Balogun Joshua, the deceased founder of Synagogue Church of All Nations, Evelyn Joshua, has disclosed that journeying through life without his long time lover, friend and husband would prove herculean.

She added that with her husband’s death, only the Supreme Being can comfort her and fill void left behind by the Ondo State Borno deceased Televangelist.

Reacting to Joshua’s death through a post on her social media page on Sunday, Evelyn described the passing away of her husband as heart-breaking, adding that only God could only be sought for solace in her grief-stricken state.

According to her, the unexpected big hammer of death must serve as lesson to all human being and its constant reminder should make it easier for believers to depend and trust God with all they possess.

“Losing a loved one is never easy; whether sudden or foreseen. It is always heart-breaking. Grief can wreak havoc on our overall well-being. That’s why it’s important to stay rooted to the Almighty. Only He can lessen our heartache and comfort us in these times. Seek refuge in him,” the post read.

The Guild had earlier reported that in disbelief of information emanating from SCOAN on Joshua’s death, Nigerians and millions of worshippers globally claimed that the cleric could not have died, rather was sleeping to regain his energy after series of sermons conducted by the pastor.

The worshippers further asked that the church release videos and possibly his last moment to ascertain that the cleric was truly dead, saying, our pastor, T.B Joshua, could not have died.

Describing the cleric as a special human, they stated that he could not have died in the manner that every other person that had passed away had gone considering his status, and were of the belief that the founder of the SCOAN could resurrect like many others.