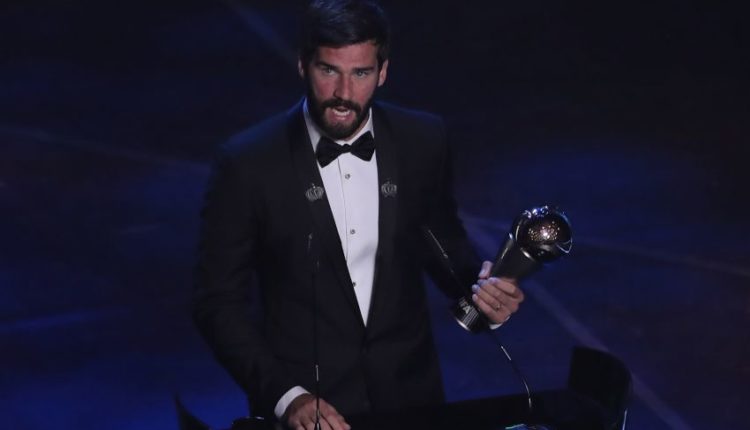 Liverpool star Alisson Becker has followed in the footsteps of Gianluigi Buffon and Thibaut Courtois by being named the Best FIFA Men’s Goalkeeper of the Year.

The Brazilian saw off competition from his compatriot Ederson, of Manchester City ,and Germany stopper stopper Marc Andre ter Stegen to win the award.

His success comes following a stellar year of personal awards for the former Roma stopper, who picked up the Champions League with  Liverpool at the end of his first season in English football in June.

The 26-year-old then only conceded one goal in the entire tournament as Brazil won the Copa America on home soil in the summer.

Last month Alisson was named as UEFA’s Goalkeeper of the Year following his performances in helping the Reds to win the Champions League, while he also picked up the Premier League’s Golden Glove award for keeping the most clean sheets in the division.

Alisson hasn’t featured for the Reds since picking up a calf injury in their opening Premier League game of the season against Norwich City in August, although Jurgen Klopp last week claimed he is closing in on a return to full fitness.

“Alisson is making big progress,” said the German in his press conference prior to the weekend’s game against bChelsea.

“He had a proper session yesterday (Thursday) with John Achterberg. Not in team training.”

Alisson could well return to action for the Reds after the next international break.

In the Brazilian’s absence, Spanish stopper Adrian has impressed between the sticks in recent weeks.

Republic of Ireland under-21 goalkeeper Caoimhin Kelleher is in line to make his senior debut for the Reds in Wednesday’s Carabao Cup third round tie against Milton Keynes Dons.