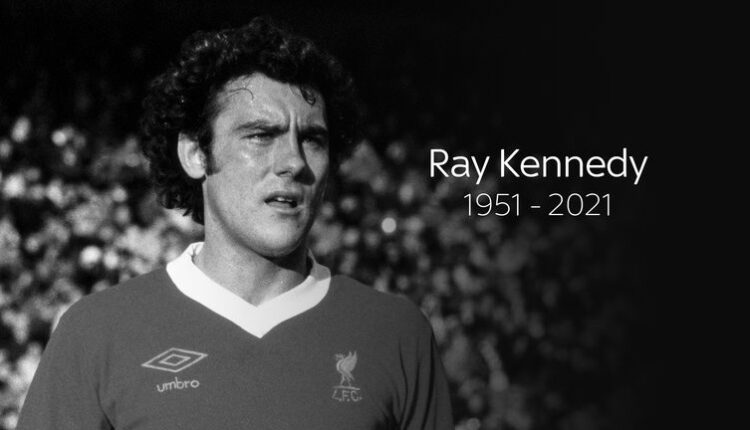 A Liverpool and England former footballer, Ray Kennedy, has been confirmed to have died at age 70 after battling with Parkinson’s disease for over 35 years.

At Liverpool, the midfielder won five league titles and the European Cup on three occasions as part of their vintage team of the late 1970s and early 1980s.

The former player died on Tuesday, barely 40 years after his retirement from the game that brought him fame across the country including his time with the London club, Arsenal, and lifted trophies.

Kenny was a member of the Arsenal team that won the First Division and FA Cup Double in 1971 and would go on to achieve astonishing success at Anfield.

The former player won 17 caps for the England national team but was never able to usurp a member of the first 11, Trevor Brooking, in the side and retired from the international game in 1981.

After news on death of the former midfielder filtered in, reactions had begun to flood in and among those that have commiserated with the deceased family was the legendary manager, Bob Paisley, who described him as ‘one of Liverpool’s greatest players and probably the most under-rated.’

He was first diagnosed with Parkinson’s when a player at Hartlepool in the twilight of his career and struggled with the illness for the rest of his life.

A Liverpool ex-striker, John Aldridge, through a statement on his official social media handle, said: “Yet another magnificent Ex LFC star has passed away folks, Ray Kennedy what a player and lovely bloke who suffered so much with Parkinson’s disease for most of his life. He will definitely never walk alone. RIP Ray.’

Another Liverpool former defender, Phil Thompson, said: “More sad news with the passing of Ray, what a great player and such a wonderful team-mate RIP pal YNWA.’