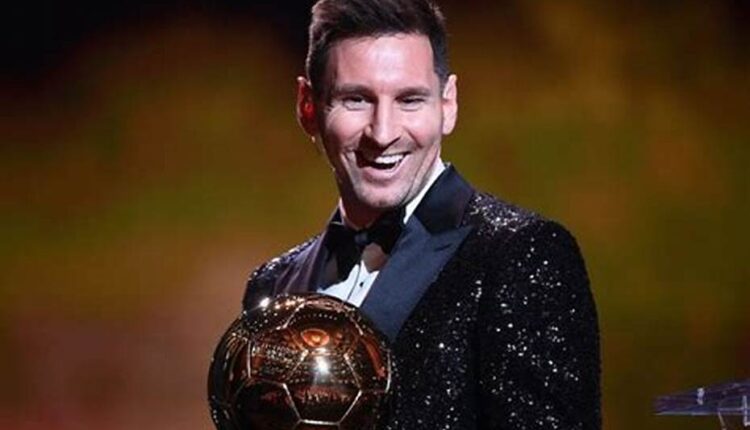 After a one-year break, Ballon d’Or award ceremony was held in Paris last night for the 2021 calendar year. During the occasion, Argentina and PSG whizkid, Lionel Messi was crowned the world’s best player for a record seventh time after pipping Robert Lewandowski to the most sought-after individual prize in football.

Expectedly, many people have been enraged about the outcome. They are of the opinion that Poland and Bayern Munich superstar, Robert Lewandowski should have won it. Their argument was based on the performance of the Pole in the last two years.

Some believe Messi did not actually achieve “anything” in the year under review, especially at the club level. And to further support their claim, they opined that the new Best Goalscorer of the Year award introduced just yesterday by the organisers was an afterthought and an attempt to placate the Poland international having denied him the biggest trophy.

At the ceremony, it was announced that two additional trophies would go out for the first time. And one of them was the Best Goalscorer of the Year, which was given to the most prolific player over the calender year.

The award was given to Robert Lewandowski, following his stunning season for Bayern Munich. He has scored 51 goals in 40 appearances across all competitions for the Bundesliga champions across the calendar year.

As if these controversies are not enough, Cristiano Ronaldo released a furious statement hitting out at claims from Ballon d’Or chief Pascal Ferre that his (Cristiano’s) career ambition was to finish with more awards than his rival Lionel Messi,

Ronaldo made it clear he was far from happy with Ferre’s claims that he wanted to better his rival’s total. The Man United forward finished sixth in the rankings and was absent from Monday night’s awards ceremony.

In this piece, I tried to explain how Ballon d’Or winners are determined and what can be done to ameliorate the raging controversies.

The Ballon d’Or is an annual football award presented by the French news magazine, France Football. It is one of the oldest and generally regarded as the most prestigious individual award for football players. It has been awarded since 1956, although between 2010 and 2015, an agreement was made with FIFA, and the award was temporarily merged with the FIFA World Player of the Year (founded in 1991) and known as the FIFA Ballon d’Or.

However, the partnership ended in 2016, and the award reverted to the Ballon d’Or, while FIFA also reverted to its own separate annual award The Best FIFA Men’s Player.

The Ballon d’Or selection process to determine the best individual player of the year included several steps and involved journalists from around the world.

To start, editors at French weekly publication France Football created a 30-player shortlist of award nominees. And then, a jury of voters for the Ballon d’Or winner is compiled by picking top journalists from around the world who will make their selections for first, second, third, fourth, and fifth place.

The top-ranking player from each journalist’s selection will receive six points, with the second-ranking player earning four points, then three, two, and one going down from the rest of their top five picks.

After each jury member has selected their top five players for the Ballon d’Or award, the total points are calculated and added, and the player to receive the most number of points will be awarded the top honour.

In 2021, Messi won with 613 total points, followed by Robert Lewandowski (580) and Jorginho (460). Unlike Ballon d’Or, the Best FIFA Men’s Player is an association football award presented annually by the sport’s governing body, FIFA, to the world’s best men’s player.

The selection criteria for the players of the year are sporting performance, as well as general conduct on and off the pitch. The votes are decided by media representatives, national team coaches, and national team captains. In October 2016, it was announced that the general public would also be allowed to vote. Each group has 25% of the overall vote.

While we may not totally rule out politics in the selection processes of the two awards, I personally will choose that of the Best FIFA Men’s Player over and above Ballon d’Or.

I see FIFA award as being more inclusive and transparent. Besides, it accords roles to the primary constituencies of the round-leather game (like players and coaches alike), thereby giving them the opportunity to have a say in the eventual winners.

With all these controversies, I think the time has come for FIFA to wake up and do something about their awards. I really don’t see why Ballon d’Or should continue to take the shine off them.

Having said that, I am really not surprised about the emergence of Messi as the winner of this year’s Ballon d’Or. An average football watcher knows that international trophies rank high and above clubs’.

The moment Argentina won the Copa America (in addition to Barca’s Copa del Rey and his personal achievements) I knew the coast was becoming clearer for him to win the award. Had Poland or Italy won the UEFA Nations League, the odds against the duo of Lewandowski and Jorginho would have significantly reduced.

I think the controversies trailing this year’s awards would not have been this intense, had the award held last year and deservedly given to Lewandowski.

He is no doubt the presumed winner last year and the excuse of covid-19 as being the reason why it was not held would have perished had Messi or Cristiano bested other contenders.

Despite the pandemic, many effects still held throughout the world, albeit virtually. Even matches were only suspended for some months. So the 2020 Ballon d’Or could have held and awarded to the presumed winner.

But it is not too late. The 2020 Ballon d’Or trophy can still be retrospectively awarded to the Pole. Only this can atone for the injustice and settle the controversies to some extent.

In conclusion, let me use this opportunity to congratulate • Lionel Messi • on this rare feat. Seven Ballon d’Or award can only happen once in generations. I think the debate about who really is the G.O.A.T. has been settled once and for all. There is now only one GOAT. Every other one is an ogunfe,

Wale Olayanju is a social commentator