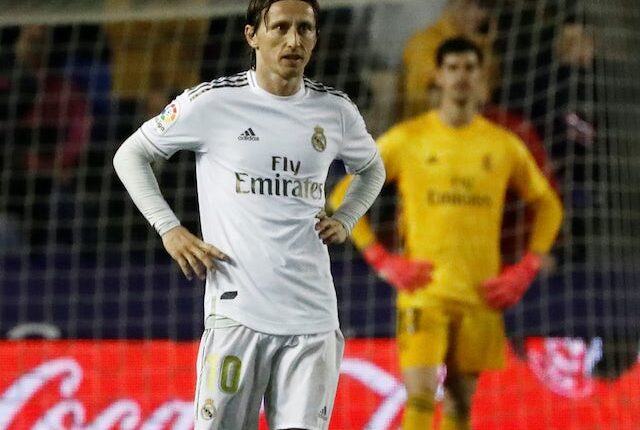 Spanish league defending champion, Real Madrid, suffered another round of defeat at home to Levante after taking lead in the league game played in front of an empty seat at the Estadio Alfredo Di Stefano stadium.

The 2-1 loss ends a run of nine unbeaten in the league for Madrid and they stay second, seven points behind their arch-rivals, Atletico Madrid, that occupies the league summit with 47 points and two matches less.

With the victory,  Levante moves up to ninth in the table, extending their unbeaten run to seven and strengthened their chances of playing continental football games next season.

Madrid, who were reduced to 10-men after nine minutes into the game following a red card received by Eder Militao, took an early lead with Marco Asensio after they break on the counter and the Levante defenders could not get back to him, leaving the player to hits his shot across goal from the edge of the box.

But after the lead, Levante turned the table around at 32 minutes, equalising with Jose Morales gaining space on the left of the box, after Jorge Miramon’s cross bounces just in front of him before he hits the shot across goal and Madrid goalkeeper, Thibaut Courtois, could not stop it from hitting the back of the net.

In the second half, Roger saw a penalty saved by Courtois but the forward did not allow the miss affect his next chance, volleying his side ahead following a corner at the 78 minute of the game.

The hosts were a man down from the ninth minute when Militao’s yellow card was upgraded to a straight red by VAR for denying a goal-scoring opportunity.

Madrid will be hoping to bounce back against Huesca next time out while their opponent would shift their attention to their Copa del Rey quarter-final clash against Villarreal scheduled to hold during the week.