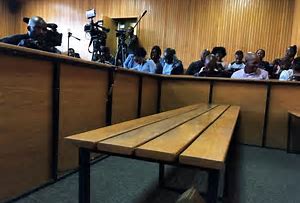 The soon to be former Lesotho Prime Minister, Thomas Thabane, has shunned his scheduled appearance in court over alleged murder of his first wife, Lepolelo Thabane, in favour of doctor’s appointment in South Africa.

It would be recalled that Thabane gave formal notice of his resignation as prime minister amidst rumours of his involvement in the death of Lepolelo, and that Lesotho Police had said the prime minister was expected to appear in court the next day to face murder charges.

Deputy Police Commissioner, Paseka Mokete, confirmed Thabane’s absence, explaining that he was expected in court by nine o’clock but had not shown up more than two hours later and that no prior communication on his whereabouts had been received by the police.

Speaking to pressmen, in the country, on Friday, Mokete assured the public that court orders had been duly served to the prime minister’s lawyers, notifying them of the day’s proceedings, and explained that no notice had been received concerning his absence from court.

The police commissioner expressed dissatisfaction at what he described as “disregard of court summons”, and stated that such action was unacceptable.

Mokete revealed that all efforts to reach Thabane, his lawyers or family members had proven abortive, adding that the prime minister’s current wife Maesaiah Thabane, who had also been detained for murder of Lepolelo but released on bail, was also nowhere to be found.

He hinted at possibility of the lovers fleeing the country in order to avoid trial and urged anyone with valid information concerning whereabouts of Thabane and Maesaiah to provide such to the police force.

‘I’m still trying to confirm his whereabouts and whether or not he will show up. We don’t know,” Paseka Mokete said.

In response, the embattled prime minister’s son, Potlako Thabane, disclosed that his father had not fled the country, but rather went to neighbouring South Africa on an urgent doctor’s appointment.

Potlako explained that at 80 years old, Thabane needed regular medical care, saying that it was imperative for the octogenarian to remain in good health so that he could be fit for trial.

“He’s not fled the country, he has gone to South Africa to see a doctor, which is expected for anyone his age,”

“My father will be back soon. He is a law-abiding citizen of Lesotho, so you can be sure that, as soon as he can, he will appear in court”.