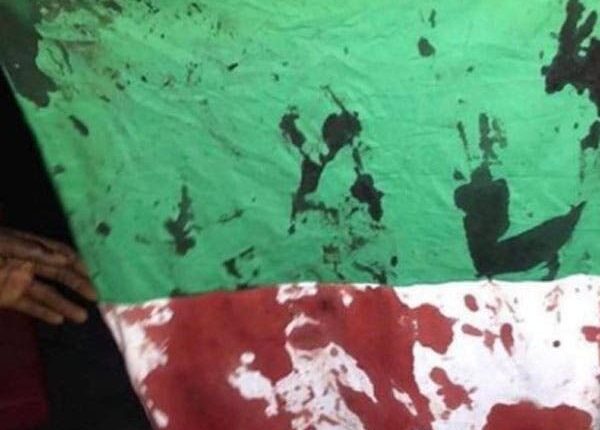 If you are reading this, then the ultimate has happened. We have laid down our lives for the cleansing of the land we call home, upon the ground we were birthed and one whose prosperity clenches the vein of our heart.

Our death was never planned, all we wanted was the chance to stay alive. Forget what some may say about us. They may call us anarchists or revolutionists.

Be careful of history classes for those who record us as insurgents and mob were weaklings and betrayers who lay in bed with politicians and power holders when the throats of their brethren and kinsmen were slitted by police officers and agents of the regime.

While some stood silent for fear of losing their access to power, when some took decisions via the prism of partisanship, when some allowed religion and ethnicity to becloud their demand for a better life for this country, we stood firm amid raining bullets and teargas while hot water cannon descend on us and batons dot our behinds.

We were never violent. We stood for decades as government and politicians deny us our basic rights and amenities. At every turn they take away all that we laboured for, we did nothing. They pushed us to the wall and we broke it to create a path. They stole our treasury and live in affluence and pride while we toil day and night to make ends meet.

When we got tired, we took to churches and mosques praying for a miracle. We did nothing.

Our children became beggars and life became unbearable. Our doctors left the country in droves and the little that stayed were told to become farmers when we complained. Our teachers lived in penury and our economy they cornered for friends and cronies.

But in the midst of all these, we sought for a way out. We lost our pride and did menial jobs. We slept day and night cursing providence for making this nation our lot. Those who could afford it sold properties and vacated the country, the rest of us? We stayed, fasting and praying, hoping for a miracle.

Comedy and humour became our coping mechanism. When they flog us and make life unbearable we make comedy skits and drawings to cool our souls. While many die, we laugh at our own misery.

This country you see today became a wild west then, it was all man for himself. It wasn’t a life we were proud of but we lived to survive. And like the resilient people the world know us to be, we survived indeed.

Everything, we created for ourselves. The government did nothing for us but we still pay taxes.

But like every human, there is limit to endurance. There is a breaking point and while we hide it for decades, the government found it.

The police who were meant to protect us became armed robbers. They accost us on the road and demand for our phones, they take us to cash points and collect our hard-earned money. They look us dead in the eye and tell us to make a transfer to them or they will shoot and nothing will happen.

Indeed, many they killed and nothing happened. They end the lives of many at the slightest argument and maim others just because they could. They separate husbands from wives and slaughter. They take away children from mothers and torture to death. We screamed but no one heard us.

So we had enough. We took to the streets to demand an end to the brutality and killings but instead of doing anything, our government descended on us. They opened fire and killed many.

We were peaceful but they framed us for crimes so they could stop us from speaking.

We asked for nothing special. We did not demand for accounts of the billions they were stealing, we didn’t ask them to do right by us and give us a meaningful country. We only asked for the right to live.

Beloved, today we have lost many comrades, tomorrow, we may lose many more. Our lives we have concluded to give to this country so that yours could have any meaning.

As they shoot and bury our bodies in unmarked graves. As bullets we pay for pierce through our bodies and skulls, remember our pains.

With my last breath, I write this. I hope our sacrifice bring the desired change. If it does, please cherish this and honour our memories but if they won and the battle rages on, rise and fight the evils so your generation doesn’t fail like ours.

Take up the flag of this glorious nation and wave it in hope. Spread our ashes on the Atlantic and let our soul rest.

We died as patriots beloved, never forget that!

Boladale Adekoya is a social commentator and writes from Lagos.