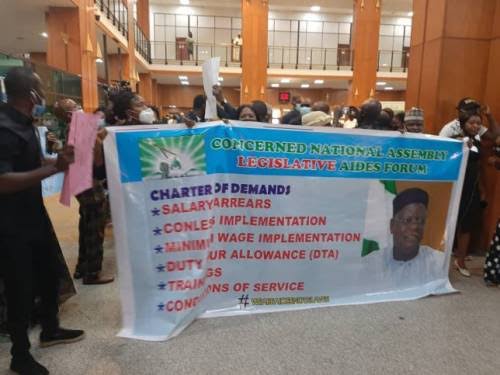 Activities at National Assembly was temporarily disrupted on Tuesday after legislative aides stormed the foyer of the NASS building to protest unpaid salaries and allowances arrears they claimed have been hampering their effective service delivery.

They argued that their arrears and other emoluments have not been paid since 2019 and that have been affecting their personal lives including balancing work with the home front which had led to abdication of responsibilities required of them as breadwinners.

The aides, under the auspices of the “Concerned National Assembly Legislative Aides Forum” ans armed with placards stromed the foyer of NASS in registering their grievances through demonstrations which they claimed would bring their plight to the fore.

While the demonstrators relocated to the back entrance into the NASS foyer, the ran into the House of Representatives Speaker, Femi Gbajabimila, who was on his way to the chamber and stopped to address them over the ensuing drama.

Addressing Gbajabiamila, the group’s South-South geopolitical zone Representative, Zebis Prince, said that in reaching a truce, the CNA must meet the legislative aides demands and implement all pending agreements.

Some of the demands, according to Prince, include non-payment of the routine Duty Tour Allowance (DTA), lack of training, non-implementation of National Minimum Wage and the Consolidated Legislative Aides Salary Structure (CONLESS).

Reacting to the development, the Speaker assured that the assembly would soon resolve the pending issues raised by the Parliamentary Staff Association of Nigeria (PASAN).

After receiving the letter of demand, Gbajabimila, said that it was “inexcusable” not to pay workers arrears dating back to 2019.

He added that the issues raised by PASAN were of paramount importance to the leadership of the House and that an end would soon be reached.

“I believe that every labourer should be paid his wages. We are looking into it. While these things can be protracted, not paying wages of 2019 is inexcusable.

“We will look into it. I will just ask that you be patient. We plead for your understanding. We know there are financial constraints but one thing I know is this will be resolved amicably and your arrears will be paid.

“We appreciate you for bringing these demands to our attention and we will attend to it accordingly,” he said.