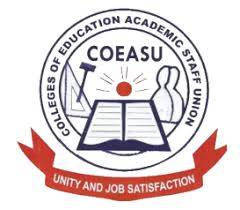 The Colleges of Education Academic Staff Union (COESU) has disclosed that an industrial action may be embarked upon if the Federal Government refuses to address the irregularities in salary payments, as well as unnecessary deductions of fees, which was allegedly being faced by its members.

It said that government implementation of the Integrated Payroll and Personnel Information System (IPPIS) in institutions across the country had resulted in higher taxation, unauthorized third party deductions, as well as non-payment of scholars on sabbatical leave, adding that the union would not accept such treatment being meted out to its members.

The President, COESU, Nuhu Ogirima, alleged that, since the adoption of the IPPIS, members had been faced with issues such as reductions in salary payment, deductions of taxes higher than the percentages negotiated with government as well as the outright non-payment of earned income, as at when due.

Ogirima, through a statement released in Abuja, stated that the IPPIS had turned out to be an exploitative tool through which lecturers across the nation were being shortchanged of legal earnings and urged the Office of the Accountant General of the Federation to re-assess the payment system and correct the recorded issues.

“Members of our union had been opposed to the enrolment of the academic staff of colleges of education on the obnoxious pay platform, IPPIS, until December, 2019, when it was imposed. Quite a substantial development has occurred since the utilization of the platform to effect payment of salaries since February 2020,”

“For instance, the non-payment of April 2020 salary, as of May 11, has been attributed to system failure. This does not augur well for the government,”

“Also, the deduction of obnoxious tax, without recourse to the negotiated tax which our members had agreed upon with their respective state governments, is evident exploitation. Same reason can be adduced for the persistent deduction of members’ salary for the National Housing Fund, to which they did not subscribe,”

“The Office of the Accountant-General of the Federation, OAGF, has flagrantly refused to remit to the union the dues deducted since the utilization of the platform to effect payment of salary of members. The non-remittance of our union dues, more than two months after its deduction by OAGF, also amounts to not only a breach of trust but a contravention of the law,”

“Should the challenges persist, the leadership of the union would have no option but convey an emergency session of the National Executive Council to take appropriate industrial decision towards redressing the situation.”

2023 and the lacuna in Campaigns

Buhari has no preferred candidate for 2023 election- FG