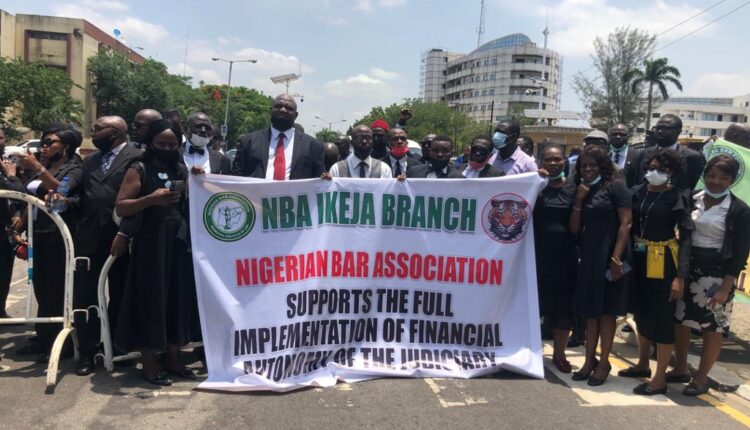 The Nigerian Bar Association,  Ikeja Branch stormed the Lagos High Court Ikeja to the Governor’s Office in Alausa, to protest against non-compliance to the implementation of full financial autonomy for the judiciary, which they claimed to be part of the provision of Nigeria’s constitution.

They have held a solidarity protest with the Judiciary Staff Union of Nigeria (JUSUN), who are demanding implementation of the financial autonomy of the judiciary.

They argued that the state governor and his executives with reasons best known to them refused or willful, neglected to address the demands of judicial.

The Guild learnt that the gate of the Government House was shut when the lawyers arrived but at least three government officials came out to attend with the lawyers who insisted on handing over the letter containing their demands to the Governor, his Deputy, or the Head of Service.

Some of the demands, according to Aguagbodo, the principal demand is to grant financial autonomy to the judiciary to secure their independence while doing their work, the funds meant for the judiciary should be deducted from the federation account directly to the chief judge account.

He said “The full compliance we are demanding for is the judiciary account be credited directly from the federation account, in which the judiciary draws their budget and manages their own affairs without sending their budget to the executive for approval. Let Judges have a say in their own affairs, let Judges manage their finance and projects. So that Judges will be dispense without fear. ”

The lawyers were later prevailed on to send their representatives to go into the government house to drop the letter. Four of them including the Chairman went in while other members waited outside.

The representatives were gone for about 20 minutes and on arrival, the Chairman of the branch said an Officers in charge of all administrative mail for the governor, identified as  Deji, who would make sure that the Governor receives it,  received and acknowledged the letter. He said the arrangement was in line with the directive of the NBA national president, Olumide Akpata.

“The march this morning is a resounding success. We would wait and see if the Lagos state governor will adhere to the demand. If they don’t, on Monday next week we shall proceed with another peaceful protest.

Also, members of the NBA stormed the Port Harcourt Government House to protest to support the industrial action embarked upon by members of the JUSUN for financial autonomy for the judiciary.

The Rivers State Governor, Nyesom Wike, has condemned the judicial demand to uncalled for, saying Rivers state were implementing full financial autonomy for the judicial

Addressing the lawyers, the Rivers State Governor, Nyesom Wike, condemned the judiciary’s demand, he said the judiciary enjoys full financial autonomy in the State, hence, the industrial action embarked upon by members of the JUSUN was not necessary for the State.

Governor Wike said it is unfortunate that judiciary workers in the State despite enjoying financial autonomy still shut the courts in what they called solidarity with other states.

The governor made the condemnation while addressing members of the Nigeria Bar Association (NBA), who were on solidarity protest in support of financial autonomy for the judiciary, to Government House, Port Harcourt on Monday.

“What’s the reason, as far as this state is concerned, for JUSUN to go on strike? Is it because their national head office asked them to do so?

“Go and ask the judiciary in this state if any money meant for them is not given to them, even beyond that. So, we are implementing financial autonomy.

A statement signed by the State Governor Special Assistant (Media), Kelvin Ebiri, stated that the Governor expressed surprise at NBA that they could protest over such issues because they were numb between 2013 and 2015 when the courts were shut in Rivers State by the immediate past administration.

He said the governor wondered about the essence of the NBA’s protest when they know that there was already a full implementation of financial autonomy for the judiciary by his administration.

“I am surprised that, for the first time, the Nigeria Bar Association (NBA) is coming on to protest. When the courts were shut down, (from 2013 to May 2015) they couldn’t go on protest.

“Again, you have said here that you’re protesting because of what you fear could happen when I leave office, on whether my successor will continue to implement financial autonomy for the judiciary.

“Why not wait until then and protest if the person( successor) is not implementing it. What do you want me to do with the person who is coming after me, to compel him to do what?

“This protest is useless, as far as this state is concerned. You have no reason. I challenged anybody on it. Tell your President, they should name those states that are not implementing it and tell judiciary workers in those states to go on strike against them not here.”

Chairman of Port Harcourt Branch of Nigeria Bar Association (NBA) Prince Nyekwere, who spoke on behalf of the group, said lawyers have been shut out of work for three weeks due to the JUSUN strike.

“Let us place on record, that we are aware that in our own judiciary, you have created an enabling environment. You have made provisions for the judiciary. In short, the Rivers State Judiciary cannot be compared to any other judiciary in the country.

“But your Excellency, we are afraid what happens with successive governors when you leave office. They may not be inclined as you are in ensuring the independence of the judiciary.” 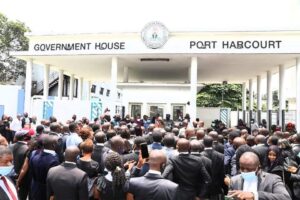