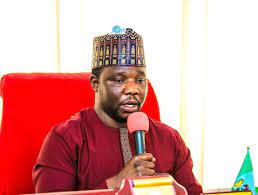 Lawmakers at the Plateau State House of Assembly have impeached the Assembly Speaker, Nuhu Abok, over alleged abuse of office and financial misappropriation amid presence of security agents outside the complex and surrounding buildings.

As gathered, the speaker was removed by eight members of the legislative arm while he was replaced by a member representing Pengana Constituency, Yakubu Sanda, who was pronounced as the new speaker.

The Guild learnt that Abok was impeached by ruling All Progressives Congress (APC) lawmakers who were escorted into the chambers by security agents while opposition Peoples Democratic Party (PDP) members were prevented from gaining access into the Assembly complex.

After the impeachment, the Assembly complex, surrounding premises and adjoining roads have been taken over by stern looking security personnel as part of move to prevent a breakdown of law and order.

Speaking during the visit, the House Majority leader, Hon. Naanlong Daniel, said that they were at the Government House in line with the tradition of the House to introduce the new leadership of the House to the governor whenever there was a change.

He said that contrary to reports making round, the new speaker emerged after 16 of the 23 Members of the House signed the petition to impeach Abok over series of allegations.

On his part, Sanda said that the new leadership of the House would work in synergy with the Executive and Judiciary for the peace, progress and development of Plateau State. He said that the House which now enjoys full autonomy would use its legislative powers to ensure that Government programs and projects impact the people at the grassroots level.

Responding, Abok Atu said that Governor Simon Lalong and the entire Executive arm was surprised with the development, but nevertheless respects the decision of the House which was an autonomous organ that has powers to manage its internal affairs.

He assured the House that the doors of the executive would always remain open for collaboration and cooperation with the legislature in delivering good governance and actualising the Rescue Agenda.