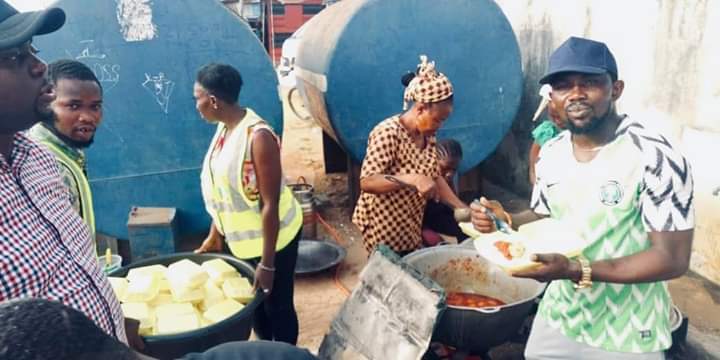 Lagos lawmaker representing Amuwo-Odofin Constituency 1 at the State House of Assembly, Dipo Olorunrinu, has sent relief materials to victims of gas explosion at Abule-Ado, Amuwo-Odofin Local Government Area, a tragedy which claimed over 20 lives and left several others with varying degrees of burns and injuries.

According to the Nigerian National Petroleum Corporation, the incident which occurred in the early hours of Sunday, was caused by a truck after it hit some gas cylinders stacked in a gas processing plant located near NNPC’s 2B pipeline right of way located in the Adule-Ado area.

It would be recalled that the State Government had set up a N2 billion relief fund to help victims and displaced persons, and also inaugurated a 16-man investigative committee to unravel reasons or actions that led to the explosion.

However, the lawmaker in his personal capacity as representative of the Abule-Ado people sent food items and other relief materials in a bid to alleviate devastation caused by the disaster, and disclosed that his initiative would run concurrently for two weeks and that it would provide two meals per day for each of the affected victims.

Speaking during his visit to scene of the incident, Olorunrinu, who sympathized with those affected noted that the relief materials were a form of palliative measures to help the victims through such trying times, adding that such tragedy could be demoralizing hence the need to rally support for those affected.

He advised the people to stay hopeful and urged government as well as other well meaning Nigerians to join hands and provide succour to the gas explosion victims.

Olorunrinu prayed for the departed souls and expressed hope that those still in hospital would recover speedily, he added that though the losses were irreparable, the people should summon courage and accept the incident as an act from God.

“It has happened, I urge you all to move forward and hope for the best. We will, however, do our best to help alleviate issues arising from this sad incident”.