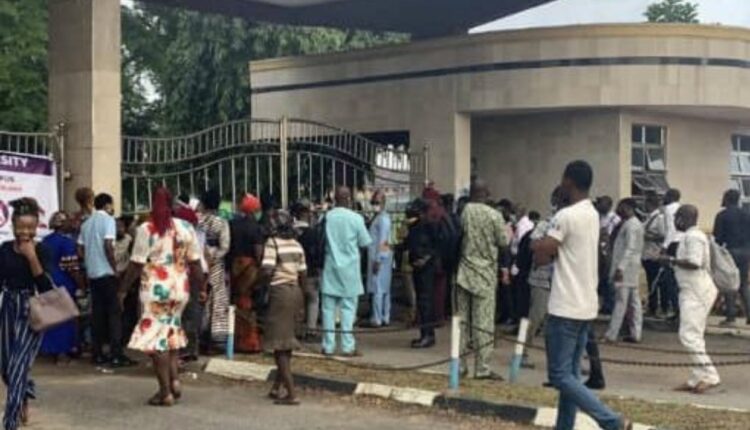 Share
Resumption of academic activities at Lagos State University (LASU) after the sudden closure over outbreak of coronavirus has been marred with staff barricading the institution entrance over unpaid minimum wages.
The workers were said to be angered that the increment in salaries promised by the Lagos State government since last year was yet to be paid even after several appeals.
The protest came days after the State Governor, Babajide Sanwo-Olu, approved September 14th for reopening of tertiary institutions for students in terminal classes in tertiary institutions across the state.
The Guild gathered that the protesters had stormed the institution gate at about 7 am on Monday and prevented the students from gaining entrance into the premises.
An eyewitness told The Guild that efforts by the Vice-Chancellor, Prof. Lanre Fagbohun, to persuade the staff to allow students and others access into the premises did not yield any fruit.
It was gathered that the school’s unions in the state had agreed to all embark on protest today but some pulled out particularly Adeniran Ogunsanya College of Education (AOCOED) chapter since the students were yet to complete their exams and that the issue does not affect the entire staff.
A senior member of the AOCOED union told the Guild that they decided to stay out considering the inability of the entire union to agree that the exercise should go ahead as scheduled.
In LASU, another senior member told the Guild that efforts to persuade the school management into paying installments proved abortive as they were asked to wait until it was considered okay for the institution to pay.
But, reacting to the issues raised by the protesters, the state government clarified that all salaries and entitlements were being approved as at when due for the institution and that payment of salaries lies with the school management and not directly from the government.
Through a statement released to newsmen on Monday, the Special Adviser on Education to Governor Babjide Sanwo-Olu, Tokunbo Wahab, explained that the institution receives N450,000,000.00 monthly as subvention and are expected to prioritize staff welfare by ensuring prompt payment of salaries as at when due.

“We wish to state categorically that Lagos State University, like other subvented MDAs, collects the sum of N450,000,000.00 (Four hundred and fifty million nairas) every month from the Lagos State Government as Subvention. The Government expects the institutions to also be responsible for the application of the funds and the staffing of the institutions. We must also have at the back of our mind that they have IGR which they generate and not accountable to government on how same is expended.

“Aside the Subvention, the government is also responsible for the infrastructural developments (which include the recently approved 8,000 plus bed hostel in this same LASU) of the institutions and other ancillary things including payment for accreditation exercise for which the last one cost the government close to N500m.

“We expect that the management of these institutions pay up their staff salaries to avoid situations that looks more like deliberate sabotaging of the efforts of Governor Babajide Sanwo-Olu led administration as we prepare for schools resumption this week,” the statement read.