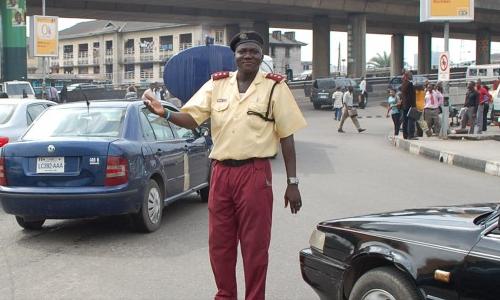 In a bid to ensure discipline among officers of Lagos State Traffic Management  Authority (LASTMA), the management has disclosed that atleast 25 erring officers have been sanctioned and dismissed for engaging in unethical conduct at their duty post in the last five months.

The General Manager, LASTMA, Olajide Oduyoye, disclosed the number of affected officers on Sunday while reacting to a viral video of a LASTMA officer having an altercation with a commercial bus conductor at Maryland yesterday.

Oduyoye stated unequivocally that rules of engagement between LASTMA officers and members of the public do not include being physical with traffic offenders while enforcing 2018 road traffic law in the state.

The general manager, in a statement signed by an Assistant Director of the agency’s Public Affairs Unit, Filade Olumide, further said that circumstances surrounding the video has been investigated thoroughly, saying, during investigation, it was discovered that the bus had contravened some sections of the traffic law.

According to him, the bus door was opened on motion while the conductor was also caught on camera hanging. This is one offense the driver and conductor have committed several times in the past and often evade arrest.

While hinting that the mode of evading arrest by this particular bus driver and conductor was to pretend to faint at the point where they contravened the law in order to whip up public sympathy against LASTMA officers, the General Manager urge road users to adhere strictly to traffic law in order to reduce travel time for economic growth.

Oduyoye further disclosed that the police escort, driver and conductor have been released owing to public sentiments that had trailed the viral video.

On the part of LASTMA, the general manager assured that residents that the agency would not shield any erring officers, saying, 25 officers of the agency had gone through disciplinary procedure and necessary sanction administered with some having their appointment terminated since he assumed office in October 2019.

Oduyoye stated that concerted effort will be deployed to apprehend these con artist offenders to face the full wrath of the law, even as he enjoined commuters to refrain from preventing LASTMA officials from carrying out their duties because enforcement is principally meant for their safety and security.