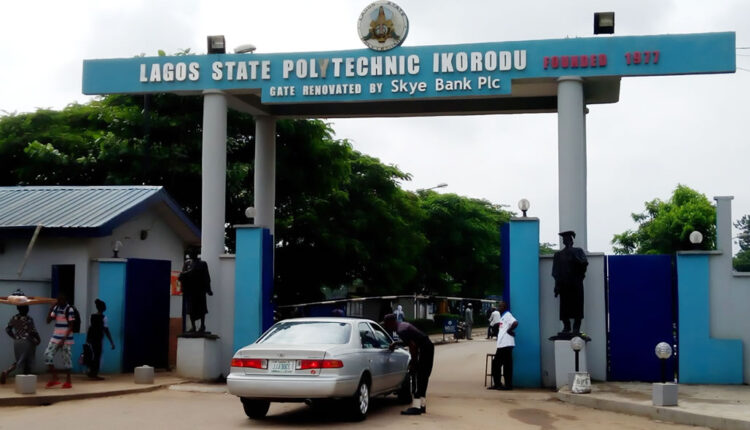 The Lagos State Polytechnic (LASPOTECH) has been ranked the third-best polytechnic and first state-owned across Nigeria, according to the 2021 Webometric ranking on tertiary institutions.

LASPOTECH, according to the ranking of 50 Polytechnics in the country, was overtaken on the list by two other institutions, Yaba College of Technology (Yabatech) which was first and closely followed by Federal Polytechnic Ilaro.

Webometric ranking of the World Universities/ Institutions is the initiative of the Cybermetrics Lab, a research group belonging to the Consejo Superior de Investigaciones Cientificas (CSIC), the largest Public Research body in Spain.

While shedding light on the ranking criteria, the Management of Webometric, a leading Spain based Institutions ranking organisation stated that Four ranking factors were used which include; openness rank, impact rank, presence rank, and excellence rank, noting that, those four factors were the criteria used to determine which Polytechnic tops the table out of all Polytechnic Institutions in Nigeria.

Speaking on the ranking, the Special Adviser to Governor on Education, Tokunbo Wahab, attributed the achievement to the State government’s general reform of the education sector, saying it is beginning to yield positive results.

Wahab, who expressed happiness that LASPOTECH has begun to take its rightful place, stated that the Lagos State University (LASU) under the State Governor, Babajide Sanwo-Olu’s administration last year was also rated as the second-best varsity in Nigeria and one of the best 100 tertiary institutions globally.

The Special Adviser hinted that the governor had given a marching order that LASU should be repositioned to become the first choice in Africa particularly on quality researches and academic excellence.

While promising that his Office would do its best to ensure the vision was realized in record time, Wahab expressed optimism that there would be the birth of two new State Universities in the state.

According to him, LASU alone cannot meet the demand for University admission by students in an emerging Smart City like Lagos with an estimated population of over 22 million people.

In the same vein, the Oba of Igbogbo Kingdom in Ikorodu axis of the state, Oba Semiudeen Kasali, commended the State government for its efforts in transforming the education of the State to make it rank among the best in the world.

Kasali, who commended the Governor for prioritizing youth development and empowerment, added that the proposed upgrade of LASPOTECH to University of Science and Technology and two Colleges of Education in the State to the University of Education WAs a testament of the administration’s commitment to quality education, research development and technological innovations in the State.

The traditional ruler while assuring the governor of the support of the State’s traditional institutions on the proposed Varsities, commended the leadership of the State House of Assembly for backing the Executives’ reforms agenda with quality legislations.

While commending the State Government for promoting the growth of Education in the State, Permanent Secretary, Office of the Special Adviser on Education, Adeniran Kasali, said the emergence of LASPOTECH as the 3rd best Polytechnic in the country is in line with the Governor Sanwo Olu administration’s 3rd Pillar of the State’s Development Agenda, which is Education and Technology.

The permanent secretary added that more laurels are on the way in other critical sectors that the State government had performed excellently well.

Nigeria: ‘The Beginning of the End’