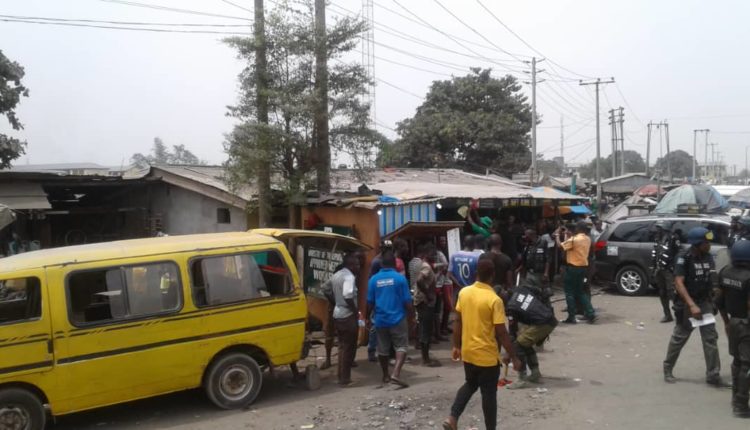 The Lagos State Government has disclosed that it would begin pulling down shanties, kiosks and removal of bus garages, as well as other illegal market structures erected near the state public schools, a move said to take effect after seven days ultimatum issued to owners of those structures, by the government.

As said, the clearing, according to the ultimatum sighted by The Guild, would affect owners and occupants of illegal structures, shanties, mechanic workshops, kiosks and commercial bus garages surrounding public schools in Mile 2, along Badagry expressway.

The Lagos State Environmental and Special Offences Unit (Taskforce), in a statement issued on Wednesday through its Public Affairs Unit Head, Adebayo  Taofiq, confirmed that a seven-day ‘Removal Notice’ had been issued to owners of illegal structures and workshops located around public schools, and that, it was a decision which was made by the state government to ensure safety of students.

Taofiq explained that the task force chairman, CSP Olayinka Egbeyemi, had discussed ultimatum issuance with a gathering of illegal owners and occupants, as well as traders, mechanics and sectional heads of National Union of Road Transport Workers (NURTW), and warned them to immediately vacate stipulated areas within vicinity of the schools within time allocated.

He affirmed that the removal order became imperative following outcry by residents, particularly managements of Imoye High School and Amuwo Odofin Junior Secondary School, that criminal elements had turned the region into hideouts for carrying out their nefarious activities thereby making the environment unconducive for learning.

“These children are the future of our nation, it is thus, left to us, what we make of them,”

“In light of this, it has become necessary to facilitate conducive learning environments around our schools. It is disheartening to allow illegal business operators turn schools surroundings to market place while the vicinity becomes a dumpsite of refuse”.

Furthermore, Taofiq added that investigation conducted had revealed that the illegal structures and shanties served as home to criminal elements who rob unsuspecting members of public, making off with valuables along highways on Lagos- Badagry expressway, and added that the occupants had received no government permit or operating license from the state government.

He reiterated that, immediately after expiration of the evaquation order notice on Monday, 3rd of March, 2020, Task Force operatives  would embark on a clean-up exercise in the area, as well as clampdown on all criminal elements.

The Task Force, however, cautioned traders and occupants not to make financial contribution or bribe anyone in order to prevent or stop the removal order, stressing that the State Governor, Babajide Sanwo-Olu had approved monetary compensation for those who deserved it.