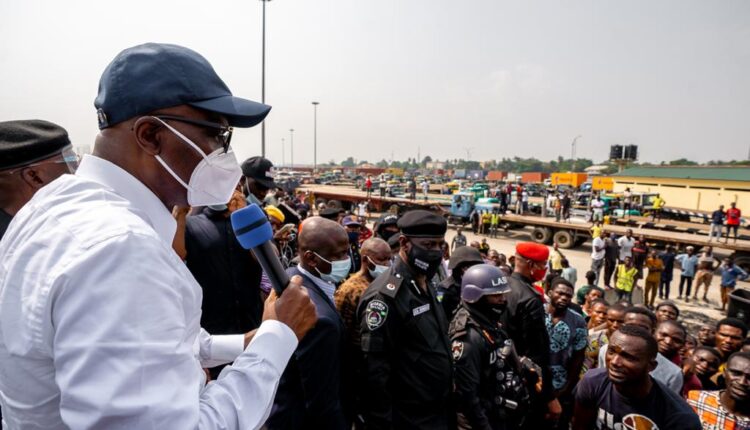 The Lagos State Government has disclosed that it would be taking over the control of Apapa gridlock from the Federal Task Force, saying dedicated officers from Lagos State Traffic Management Authority (LASTMA), and policemen would take over the traffic control.

Aside from the traffic control, the government indicated that the sharp practices and inadequacies observed in the handling of the container operations at the ports would be communicated to the Minister of Transport, adding that the misconducts of the policemen stationed closed to the ports would be reported to the Inspector General of Police (IGP).

Speaking on Monday when he visited the Apapa area of the state to assess the situation on the ground in preparation for the takeover of the management of the Apapa traffic, the state’s Governor, Babajide Sanwo-Olu, said that his administration had begun reviewing all activities that led to the problems being experienced in the area.

Addressing the major stakeholders and operators in the port, he hinted that part of the steps being taken by the State Government to restore sanity back to the area was to take over the enforcement of the Presidential Taskforce on Port Decongestion and create a new operational template for the task force.

Sanwo-Olu wondered why container-laden trucks not yet called upon for loading in the ports were indiscriminately parked on newly rehabilitated Tincan Road, instead of moving into the approved terminal provided by the Government.

According to him, this is about the fourth time which my government has been trying to address Apapa gridlock and bring sanity back to the area.

“On each occasion, we had come here, we knew that there were road constructions. This time around, there has been a lot of improvement and we have seen that a lot of the roads within Apapa have been completed. But, there has been no respite for commuters in terms of free traffic flow.

“Our plan is to bring about a cohesive system where all stakeholders would understand their roles and resolve challenges being encountered. Since last year, the Presidential Taskforce has been working on this issue. Now, there is a process that is starting in which the State Government is taking over the task force. This is one of the reasons for this trip to Apapa today; to ascertain what needs to be done. We will have a team of policemen and LASTMA dedicated to Apapa Ports for enforcement of task force’s mandates,” he said.

The governor said the visit to the ports would be followed up with stakeholders’ engagement with NPA, shipping companies’ owners, and freight forwarders, stressing that a situation where truck drivers needed to wait for about 10 hours for handing over of operation from one NPA team to another was not acceptable.

He added that it was time the arm of the law caught up with those who had created the situation that led to the chaotic movements of container-laden trucks in and out of the ports.

He said: “Lagos State Government is not the owner of the ports whose operations is causing pain to residents, but we owe a duty to our citizens whose lives and businesses have been badly impacted because of the gridlocks created in this part of the State. I believe this trip would give us another opportunity where all of us, as stakeholders, will be able to identify impediments and resolve the issues once and for all.”

Sanwo-Olu also maintained that part of the issues to be resolved with the Federal Government over Apapa congestion was the uniformity in the operational license being issued to barge owners.

This, he said, was to stop the creation of illegal terminals for barge operators and make an adequate plan for licensees operating in traffic-prone areas.

“We have arrested people we felt were operating illegal barge terminals before, but we were surprised some of these people had licenses issued by the Federal Government. This is part of the issues we want to resolve. We are working collaboratively with the Federal Government on this. If someone gets approval for barge operation, let Lagos government be aware so that roads are probably planned to those terminals,” he said.