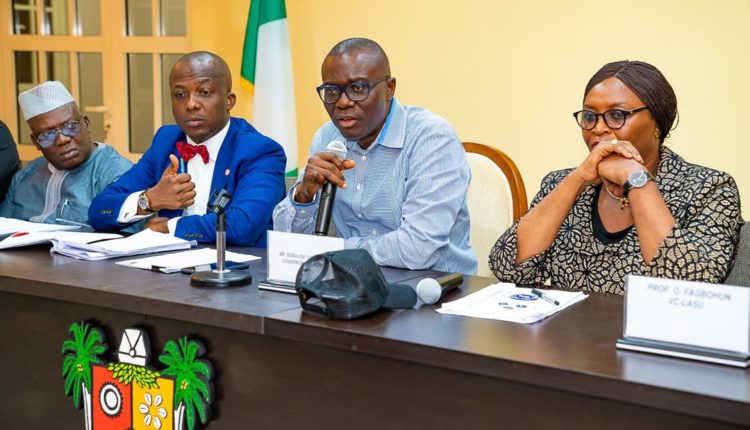 Thirty-Six years after Lagos State University (LASU) had operated as non-residential, the State Government has signed a pact with six private developers to build 8272 units of hostel worth N130 billion within the institution.

The 8272 units hostel, coming under a 35 years Build, Operate and Transfer (BOT) agreement, is expected to be completed in another 18 months within LASU campus and serve over 30 percent of the 26,000 undergraduate students; ending cases of over subscription of privately owned off-campus residences.

Sanwo-Olu said the development further underscored his administration’s objective of driving up quality output across the State-owned schools through provision of critical infrastructure that facilitates better-quality teaching and learning.

He said: “We have just approved an investment that will not only provide comfort to students, but also make positive impact on the future of our youths. If we agree that the youth as tomorrow’s leaders, we should not pay a lip service to things that will mentally prepare them for the future. It is only when we make investments like this in citadels of learning, such as Lagos State University and other higher institutions, that we can help the youth activate tomorrow they desire.

“The partnership we just sealed with the six private investors is strategic because it is going to strengthen our capacity as a Government to scale up education quality and bring about improved academic performance of students. It will also help LASU in terms of global rating and outlook. We are using this model as a test case, in which governments from other parts of the country will come and emulate. I believe we can deliver on this project and set a precedent that will change the course of tertiary education for good,” the governor added.

Sanwo-Olu, however, cautioned the developers against defaulting on neither terms of agreement nor agreed deadline for project completion

The governor hinted that State Government officials would be deployed to monitor project development at every stage of their construction to ensure compliance with stated agreement.

Earlier, Special Adviser to the Governor on Education, Tokunbo Wahab, argued that the project approved by Governor Sanwo-Olu is a legacy that would the administration, saying it marks commencement of new dawn in Lagos education sector.

He said: “Today’s signing of the agreement speaks to the heart of the Sanwo-Olu administration’s T.H.E.M.E.S agenda, which takes provision of quality education as a fundamental pillar. All we have just done is to provide infrastructure that will make the campuses of our tertiary institutions’ habitable place for our students. By this agreement, we have just made huge positive impacts on the 26,000 LASU students, who regularly face needless pressure in securing scarce off-campus accommodation”.

LASU Vice-Chancellor, Prof. Lanre Fagbohun, described the project as a catalyst that would radically change landscape of the institution.