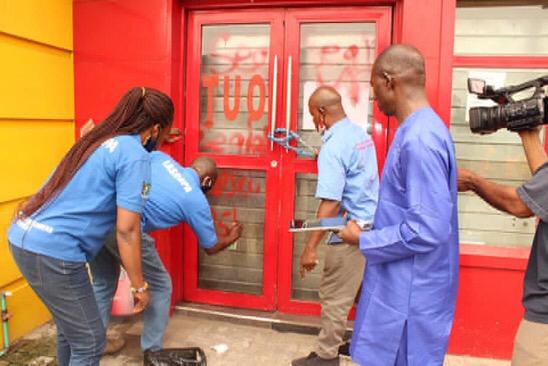 As part of measure to rid all forms of unwholesome products and to protect consumers’ rights, the Lagos State Consumer Protection Agency (LASCOPA) has shut down a supermarket, Home Affair, for allegedly selling expired products to customers.

The retail store which is located at located at 21, Ijaye Road, Ogba was sealed for displaying expired products on their shelves for possible sale to unsuspecting members of the public.

LASCOPA’s General Manager, Afolabi Solebo, in a statement made available to newsmen yesterday, said that the agency found expired products, such as Kelloggs Krave (Chocolate Hazelnut) and frozen foods, on the supermarket shelves.

“I, personally, discovered the expired items on the supermarket shelves on the 23rd of February, 2021, while on a routine check of supermarkets in the area. On discovering the expired products, I told the staff to remove the items from the shelves, which they did in my presence.

“However, the monitoring and enforcement team to go there the following day and discovered that the items have been returned to the promo shelve”, he explained.

The LASCOPA boss, who claimed to seal the store in interest of the general consumers in the State, added that the organization would not fail to initiate litigation if retail shops and supermarkets do not stop displaying expired products for sale.

While he urged consumers in the state not to hesitate to report any supermarket or shops within the State where expired products are sold.

Solebo advised residents to submit their complaints free of charge by visiting the office of LASCOPA at 2b, Soji Adepegba Close, off Allen Avenue, Ikeja or send correspondence to the Agency’s e-mail addresses: [email protected] ng and [email protected] for necessary action.