Just in: Nigeria’s Omicron cases jump to 49 amid…

CAN to Makinde: You have traded with God by exempting… 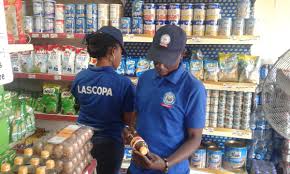 Concerned about consumer health and safety, the Lagos State Government has sealed a prominent supermaket in the state, Ambel Supermarket, over alleged substandard products being displayed and sold to customers in the store.

According to the government, some traces of kerosene were allegedly found in soft drinks which were being sold in the supermarket located in Gbagada Phase II area of the state, which led to immediate sealing action taken by government officials.

The Lagos State Consumer Protection Agency (LASCOPA), revealed that the action had been carried out promptly and in accordance with law and said that it was part of State Governor, Babajide Sanwo-Olu led administration’s efforts to guarantee protection of consumers in the state from unwholesome products, which could be injurious to the public and lead to health hazards.

The Special Monitoring Team of LASCOPA, led by the General Manager of the Agency, Kemi Olugbode, who enforeced the sealing of the supermarket on Friday, said the action had been taken following complaint received from one of the consumers who purchased and drank soft drink from the supermarket.

Olugbode explained that during a surprise visit to Ambel Supermarket for an impromptu inspection by the team, it was discovered that the drinks on sale had a trace of kerosene taste, adding that the team took samples and began conducting series of laboratory tests and analysis for further confirmation so as to ascertain the true state of ingredients used in producing the drinks.

She made assurances that in accordance with her agency’s mandate which is to protect and promote the interest of consumers from the marketing of products that are hazardous, all necessary laboratory tests would be conducted and thoroughly supervised in order to unravel the mistery behind the taste allegedly traced in the drinks.

She added that pending outcome the tests, the store would remained closed to protect other unsuspecting consumers and Lagosians generally from purchasing contaminated goods from their stables or from any other outlet of same supermarket.

Olugbode therefore, charged consumers to ensure that they always pay adequate attention to the details of products before making purchases, and reiterated that citizens should not hesitate to lodge a complaint about any unsatisfactory product to the agency.

“This is why we are here. To ensure that consumers are offered the best quality goods and services and to protect them against substandard and harzadous products that are, attimes, put on sale by unscrupulous store-holders,”

“So I want to assure Lagosians that we are on the case, results would soon be coming in from the tests and that they should be rest assured that the agency will only take decisions to the best interests of consumers”.